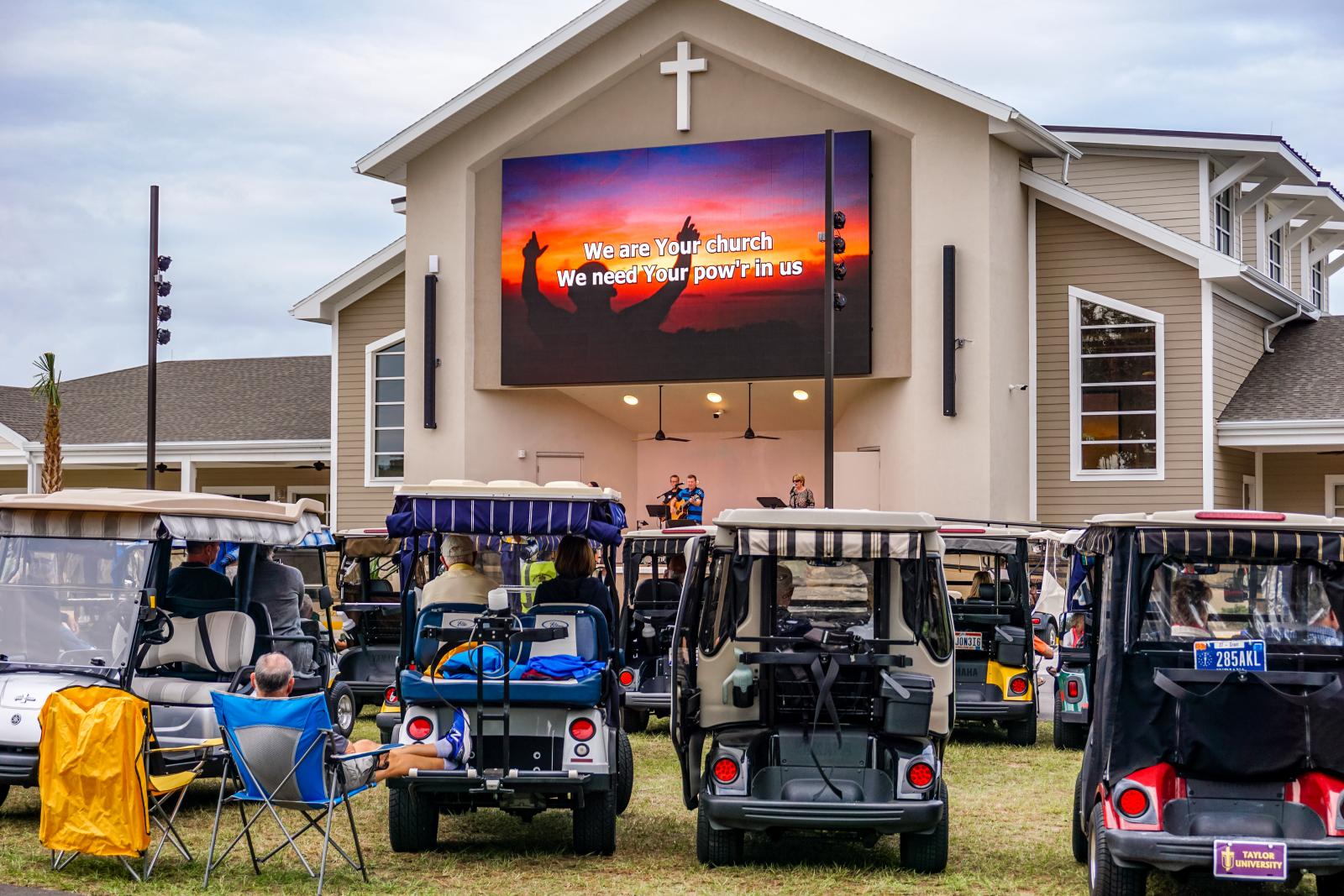 The late afternoon Florida fall beckons as the humidity drops, the cloudy sky holding no threat of rain. Pastor Chris Holck watches colorful golf carts begin to arrive at the outdoor amphitheater known as The Grove, while men and women in bright orange vests direct traffic.

And then the worship band begins, and soon Chris is preaching from Matthew 7:7-12 about prayer. Yes, it’s a Sunday church service—typical in some ways but mighty exceptional as the first-ever outdoor golf-cart drive-in service for Live Oaks Community Church (EFCA) serving The Villages, Florida. Members of Live Oaks are eager to invite their community into their worship.

As he looks out over the 180 people gathered—seated in their golf carts1 or in folding camp chairs in the front row—Chris knows that all the work, planning and prayer to find a unique way to reach baby boomers was worth it.

Live Oaks Community Church is a 5-year-old congregation of baby boomers that meets across the street from The Villages, a community known nationwide for its active lifestyle and social gatherings for those ages 55 and up.

The Villages’ reputation as something akin to a college campus party scene is largely a figment of the media’s imagination, Chris says. Yet the Live Oaks community reflects the same active lifestyle with its desire to play hard, pray hard and finish well (“If we’re not dead, we’re not done”). Think “Grandma’s gone godly” instead of “Grandma’s gone wild.” Obviously, Chris points out, the boomer generation encompasses a wide age range: from roughly ages 53 to 71. Differing ages, interests, abilities and availability. Some are enjoying more discretionary time or are full-out retired; others are just contemplating an empty nest; still others are immersed in their careers but beginning to consider what’s next.

The Holcks would ask each of them: How will you find a God-honoring balance at this new stage in your life?

Prior to the launch of Live Oaks, Chris had pastored in three EFCA churches over the course of 22 years. Then he and his wife, Kathleen, consulted for four years with the Evangelical Free Church movement via EFCA Encore—“helping older adults live out their faith in their second half and helping churches do a better job of gathering and mobilizing boomers.” (For helpful background, read “Catch the Age Wave” from the summer 2008 EFCA Today issue.)

Then in 2010, the Holcks were asked to consult with a group desiring to plant a church in The Villages. The Holcks themselves began praying about a move south from their home in Iowa. They wrestled with whether it would be a good idea to plant another church in an area where there were already 150 churches. But they believed that they could bring a unique perspective as an EFCA church with a community mindset.

Baby boomers want to “find ways to create a God-honoring balance in their second half of life,” Chris says, himself a boomer at 61. “They look for ways they can find that balance between play hard and pray hard.” Of course, the Live Oaks community meets for indoor services too. Photo by Dennis Roberts

Psalm 92 speaks of the righteous flourishing, and that “they still bear fruit in old age; they are ever full of sap and green” (Psalm 92:14, English Standard Version). The Holcks want to both empower boomers who already know the Lord to serve in their areas of gifting, and then give them the resources they need to reach others in their community.

In a recent Pew Research study, 78 percent of more than 13,000 baby boomers surveyed identified themselves to be Christians, but only 38 percent attend church services on a weekly basis. The Church has a wide-open mission field.

Baby boomers are categorized most often as those born between 1946 and 1964. During that timeframe, 72.5 million babies were born. The boomer population in the United States reached its apex in 1999 when immigrants born during those years were added, making the total baby boom a whopping 78.8 million people.

This large cohort is cut from a different mold than its parents’ generation. Boomers expect to live longer and healthier lives. They are not interested in bus trips and hymn sings. They want to make a difference. While some aspects of Live Oaks' ministry are unique, fellowship and warm relationships are the same the world over. Photo by Dennis Roberts

Having spent many years working, boomers bring a lifetime of skill acquisition to the table. “They have an accumulation of knowledge and godly wisdom from all the stuff they’ve devoured, and they are in touch with who they are,” Chris says. "They know what their fit is. Many have the financial strength to do powerful things. Culturally, they have been change agents in society.”

To work to their strengths, boomers desire freedom but also help from the Church in using their gifts. They want the flexibility to visit their grandchildren when they can, but they also want real connections with others in their generation.

The Church, however, needs help figuring out how to best utilize this large subset. Matthew 25:14-30 encourages believers to not bury their talents but invest them for the kingdom. Some churches, however, “are still hiring retired pastors as ‘visitation’ pastors and think this meets the need of their ‘senior’ members,” says retiree and long-time EFCA member Don Johnson.

“That is an outdated model,” he continues. “Baby boomers tend to be far more active.”

A public school principal for 40 years, Don and his wife, Nancy, grew up in the EFCA and travel between St. Croix Falls, Wisconsin, and Evergreen, Colorado.

The Church runs the risk of losing the vast skills of the Johnsons and others from their generation if it continues to lump them with the seniors group. “We are not our parents,” they will tell you. No one arrives without a friendly welcome. Photo by Dennis Roberts

Missional at this and every stage

While the Church has been rightly concerned about millennials, boomers in our midst have more leadership skills and life experience to offer. Yet it might take some creative rethinking of ministry strategy and structure, especially for other boomers like the Johnsons, who split their time between two cities and two churches.

Chris suggests three questions for church leaders to ask themselves:

To accommodate the huge capacity and willing hearts of the boomers in its area, and still give them the freedom to travel to visit grandkids, Live Oaks Community Church organizes both mission trips and service projects. For example, members have traveled for ministry to the inner city of New Orleans and overseas to Cuba and the Dominican Republic.

Live Oaks also serves as the hub of Operation Christmas Child for communities around The Villages. In 2017 alone, they packed more than 11,000 boxes for kids in need worldwide, through this ministry of Samaritan’s Purse.

Nancy Sarcia, 62, loves helping behind the scenes with this project—serving as the “cut up,” as she describes herself (meaning that she cuts up material for different parts of the project). She loves being able to serve in ways she was not able to do while raising her family. “I love what we are doing,” she says. “It gives us a chance to be the hands and feet of Jesus.” Despite the church's primary contingent of baby boomers, Pastor Chris Holck ministers to all ages. Photo by Dennis Roberts

Live Oaks also hosts events as a way for nonmembers to get more comfortable with the church. Just a few short weeks after its initial drive-in service, the church hosted a bluegrass concert in The Grove that drew 750 people, nearly half of those arriving in golf carts.

“The boomer harvest is ripe,” asserts writer and generational researcher Haydn Shaw. “This is the critical time for your church to give boomers a vision of what’s possible for their spiritual life and what difference they can make with this next stage of their lives.”

A golden opportunity to finish well

Bill Hicks, 66, and his wife, MaryAnn, helped the Holcks launch Live Oaks Community Church just a year into their own retirement. “The baby boomer generation has the longest life expectancy and thus the most retirement years in history. Don’t waste this opportunity for the kingdom!”

Chris adds: “When was the last time your [church] leadership board had a 30-minute discussion about how you can reach boomers? Get it on their radar. It’s a golden opportunity.

“People need to have a sincere walk with God to their last breath. How can we help them finish well?”

1There are more than 50,000 golf carts in The Villages and in excess of 100 miles of golf cart trails to explore.

Stephanie Reeves is a freelance writer in Orlando, Florida.