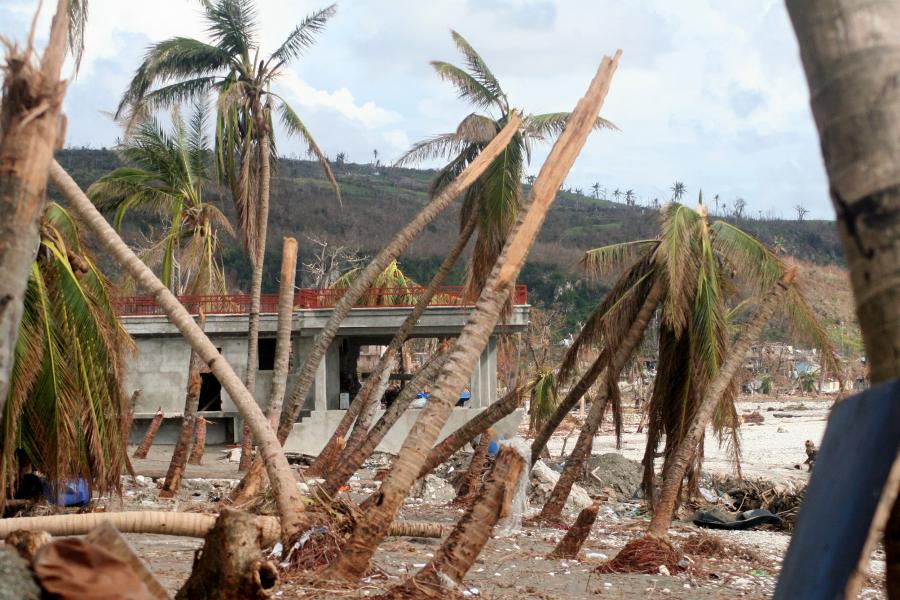 Why we cross denominational boundaries and partner with local believers to bring relief.

Infographic courtesy of UN Office for the Coordination of Humanitarian Affairs

After Hurricane Matthew hit Haiti on Tuesday, October 4, Mark Lewis found himself immersed in his own virtual reality. Except this was no game; it was deadly serious.

The extent of damage in Haiti’s southwestern communities was not yet known, but Matthew was next on-track for Cuba. As director of EFCA ReachGlobal Crisis Response, Mark and his team were glued to their phones and computers, connecting with staff members and ministry partners1 in the afflicted areas.

“I had a surreal few days of being on the internet with What’s App, email and Skype pretty much continuously for 12 hours a day,” Mark says. “In reality I’m in my living room, but virtually I’m with these people I know and care about.”

His team’s early warnings to friends in Haiti meant that some church members learned what was heading their way even before the Haitian radio stations began broadcasting the dire news.

Typically, if the crisis were affecting just one country, Mark would immediately purchase a plane ticket.2 After all, he’s been connected to Haiti since the launch of EFCA ministry there following the 2010 earthquake. His heart is there. ReachGlobal has six staff members serving full time there, plus dozens of ministry partners and more than 120 short-term teams serving annually.3

And the EFCA has been active in Cuba since 2012 with its partner denomination, Los Pinos Nuevos—assisting with leadership development and pastor training. Hurricane Matthew's fury hits Haiti. Photos above and at top by Dave Mathis, EFCA ReachGlobal
In Haiti, it is as if a giant weed eater came through, followed by the storm surge.
Tweet

But Hurricane Matthew obviously wasn’t a single-country event. After Cuba, it was also on-track for the entire southeastern United States—which meant two EFCA districts and many of their churches. So Mark stayed put, trying to build a communication network and contingency plans “from north of Miami to New York City”—wherever Matthew might strike.

“The whole end of the week and weekend was spent waiting: Where will it go next?”

And it’s not as if Mark were just enjoying a quiet week in his Mandeville, Louisiana, home when Hurricane Matthew interrupted. He was ironing out final plans to fly to Lebanon and help EFCA leaders address the Syrian refugee crisis. And he and his staff were coordinating recovery efforts after August’s devastating floods in both Louisiana and South Carolina.

Disasters don’t take a vacation. So crisis response can’t either.

Start with neighbors nearby

Ever since the 7.0-magnitude earthquake upended Haiti in 2010, EFCA Crisis Response has helped orchestrate a robust network of local churches and Christian organizations that together address ongoing physical and spiritual needs in this warm-hearted island nation.

In Cuba, the EFCA’s partner, Los Pinos Nuevos, sent several teams to help local churches in the two towns most affected by Hurricane Matthew. To reach Maisi, the teams hand-carried food and water down a road too destroyed for vehicles. There, they found only two buildings left standing: the pastor’s home and the church. Hurricane Matthew destroyed an estimated 80% of buildings in some areas of Haiti. Photo by Dave Mathis, EFCA ReachGlobal

So, relying on the teams in both countries to send reports until he could arrive in person, Mark waited for news of the hurricane’s weekend impact on the southeastern United States. Those in the direct line of fire couldn’t wait: Millions evacuated onto crowded highways leading away from coastal communities.

The following Monday, Mark flew ahead to assess the storm’s impact with leaders of the EFCA’s Southeast District, as four other staff members drove east to Jacksonville with two trucks pulling supply-laden trailers.4 The good news had preceded them: Damage was far less serious and widespread than expected.

Wherever Crisis Response works around the world—both domestically and internationally—Mark and his team first assess EFCA needs, but they don’t stop there. Their goal is to equip believers of any denominational stripe to be agents of the gospel via hands-on crisis response in their own communities.

That’s why, when local churches in the district didn’t need their help, the team was ready to move when a fellow ReachGlobal staff member mentioned the needs of his home church (not EFCA) in hard-hit Hilton Head, South Carolina.

“We took our trucks and trailers and left Jacksonville for Hilton Head,” Mark says.

The island resort community had taken the impact when then-Category 2 Hurricane Matthew struck in the early hours of Saturday, October 8. Giant trees blocked roads, damaged houses and tore down power lines, and the storm surge flooded homes. The Crisis Response team arrived on Tuesday, October 11, passing through police checkpoints to be the first responders to reach Hilton Head Presbyterian Church. The church opened up its campus to Crisis Response and later to two other relief groups—feeding and deploying volunteer work teams into the damaged community. “Ninety-nine percent of people we’re connecting with in Hilton Head are not the rich and famous,” Mark reported. “They’re those living in small cottages and mobile homes—those who survive on the north end of the island to serve the tourists and beachfront places on the south side.”

Even as he was making connections in Hilton Head, Mark and Crisis Response staff were broadcasting the need for financial help and volunteers via their networks.5 Then, leaving his team members behind, Mark flew to Haiti on October 12 (with plans to arrive in Cuba in November).

Mark’s drive down the main coastal road into tiny Port Salut, Haiti (roughly 18 miles southwest of Les Cayes), shocked him less by what he saw than by what others told him he should have been seeing. His companions in the car (long-term missionaries to Haiti from the Brazilian Evangelical Free Church) described the area as historically lush and fruitful—“just gorgeous”—despite the material poverty.

"Hurricane Matthew is more damaging to the country than the 2010 earthquake." — Dr. Jean Dorlus
Tweet

Coconuts, plantain, and breadfruit and mango trees were major sources of food security for the locals and exported to the rest of the country. But now?

“It’s as if a giant weed eater came through,” Mark says, “followed by the storm surge.

“My friends described how houses used to line the road on both sides. Now, particularly on the ocean side, there’s no evidence there has ever been a house. Total devastation.”

For Americans numb to Haiti’s tragedies, this one more indignity might be easy to dismiss. Until you grasp that what Haitians lost to Hurricane Matthew wasn’t simply “a little bit more.” Matthew—with its 145 mph winds and engulfing storm surge—was a blow to their very sustainability.

“In some insidious way,” says Haitian partner Dr. Jean Dorlus,6 “Hurricane Matthew is more damaging to the country than the earthquake of 2010.”

“Soon it will be like a famine in this place,” agrees Dave Mathis. Dave and his wife, Sharron, co-lead the ReachGlobal city team in Haiti. “I am struggling with a multitude of feelings. If you hadn’t seen this area prior to this storm you cannot fully comprehend the devastation.”

So what does so much devastation mean for crisis-response efforts?

Because of ReachGlobal’s strong, long-term partner relationships in Haiti, ministry and relief efforts began immediately. Google Maps says that Port Salut is five hours by car from the capital of Port au Prince. But now, with bridges washed out and debris-strewn roads, the trip takes closer to seven hours.

But for the last few years, this remote area has been the site of intensive pastoral training via ReachGlobal and a team of Brazilian missionaries. So conversations began immediately about how to offer help for the long term, falling into three broad areas of greatest need:

Food sustainability. “People are hungry,” Mark says, “but we’re starting to see U.N. convoys with the World Food Programme. So our goal is to help families get some measure of food security back for the future.”

The plan: work with Haitian agricultural and church partners to distribute fruit tree seedlings and help the Haitians develop backyard gardens. In the meantime, introduce disciplemaking by walking alongside families and introducing biblical principles of farming, stewardship and creation.

Community connections. “Dealing with trauma and redeveloping community is important,” Mark says. “Help the community gather and have something else to think about.”

Structural rebuilding. While physical help isn’t the only priority, it’s undeniably important in these coastal communities, where an estimated 80 percent of homes have been destroyed.

The plan: work with partners to identify families at greatest risk, then coordinate volunteer construction teams in conjunction with the community.

In each of these three areas, Mark says, Crisis Response will serve behind the scenes of its Haitian-led ministry partners. “We become just a connector and help with the resources.”

The EFCA Crisis Response team was the first responder to reach the community around Hilton Head Presbyterian Church. Photo by Chris Yarborough.

Mark Lewis only spent three days on the ground in Haiti. But the beauty of ReachGlobal Crisis Response lies in its deep connections to others who are already responding—believers who know these coastal communities, who know the pastors and have deep relationships built on years of investment. Crisis Response gets to help coordinate resources and equip those who are best positioned for long-term gospel ministry.

Meanwhile, Mark had a flight to catch to another crisis hotspot—another chance to see a virtual reality come to life on-the-ground, this time in the Middle East, as his team helps equip believers in their response to the Syrian refugee crisis.

He’ll head to Cuba soon after that. And if he’s not back in Hilton Head or Haiti himself, he’ll be tracking the work of others who are, grateful for partnerships across the globe that help make the gospel as strong a reality as the crises threatening to engulf them.

Stay abreast of developments in South Carolina, Cuba and Haiti by following ReachGlobal Crisis Response online. Donate online to Hurricane Matthew relief work. And learn how you and your church can send a team of volunteers.

1In any area of the world where EFCA ReachGlobal responds, its ministry partners range from outreach-minded local churches to other Christian missionaries and missionary organizations, to key individuals.
2In his travels to check on Crisis Response projects worldwide, Mark Lewis has logged more than 200,000 air miles in 2016 alone.
3EFCA ReachGlobal Crisis Response comprises more than 36 staff members committed to serving the mission field that follows crisis, plus dozens of others who are available at a moment’s notice as part of the Crisis Response "Mobilize" network. Their roles range from communications coordinator and food service manager, to trauma care counselor and construction manager. And, of course, tens of thousands of volunteers who have served at 29 crisis locations since Hurricane Katrina in 2005.
4The Crisis Response team—headquartered in New Orleans—owns a fleet of six pickup trucks, six other response vehicles, 16 trailers and two skid loaders, which are deployed around the country (or waiting for deployment) at any time. Mountain Life Church in Fort Collins, Colorado, has committed matching funds toward replacement of these high-mileage (and high-maintenance) vehicles. To learn more about this valuable way to multiply ReachGlobal’s response in the event of domestic crises, contact Crisis Response.
5Mark estimates that he sent 400 emails or texts from his phone and computer in the week following Hurricane Matthew’s landfall—assessing damage in all three countries and arranging for staff, volunteers and supplies to be set into motion.
6Dr. Jean Dorlus is national coordinator of the Haiti Consortium (a partnership of Haitian and U.S. believers to break unhealthy dependency on foreign aid and see gospel transformation across the country) and president of the board of Vision d’Antioche (a Haitian missionary-sending entity).