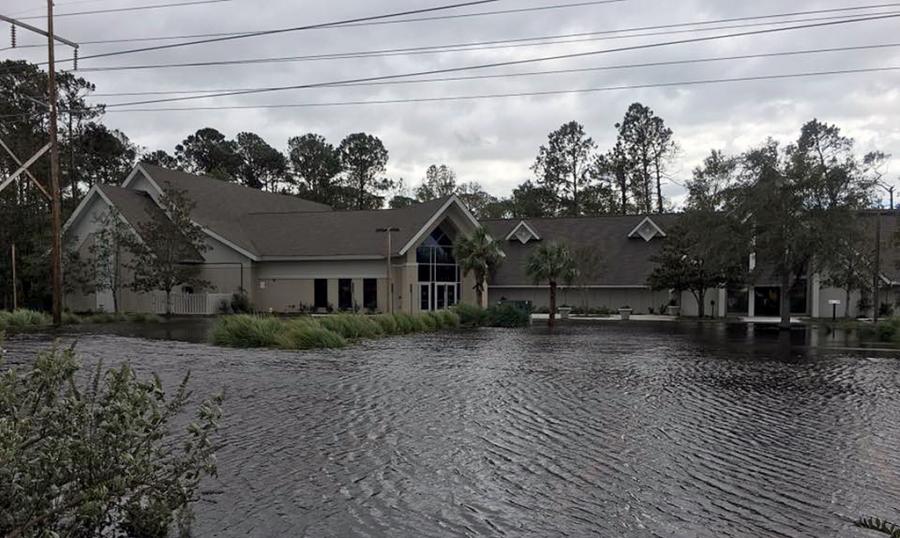 Local crisis response in the wake of Hurricane Matthew

Pastor Bill McCutchen didn’t even know if his church was still standing. News reports indicated that Hurricane Matthew had wrecked Hilton Head Island—the Category 2 storm battering more than 3,700 buildings, with the damage on nearly 400 of them classified as “substantial.”

It turns out that Hilton Head Presbyterian Church was undamaged, much to Bill’s grateful surprise, even though a dozen massive trees had fallen around the building. “It was as if God decided to protect our campus for the express purpose of serving the needs of our congregation and community,” he says.

As a result, the church could then serve as a hub for relief efforts for the island’s 37,000 residents. Yet the 500-member congregation didn’t have enough resources.

Thankfully, however, the EFCA ReachGlobal Crisis Response team arrived on Hilton Head Island three days after the hurricane as one of the first responders—tipped off by a ReachGlobal staff member with connections to the congregation.

The goal was to be a short-term “kickstart” for the church’s own relief efforts. The EFCA team would lend its years of crisis response experience while calling in volunteer teams connected with the EFCA to serve alongside community volunteers.

The Crisis Response director, Mark Lewis, stayed only long enough to get his team established before leaving the next day for Haiti—devastated by Hurricane Matthew.

One couple with him on the fast-arriving EFCA team was Nelson and Anastasia Fuentes. They had been raising funds to work with ReachGlobal in Belgium (doing both crisis response and student ministry) when Matthew hit. “Once we learned about the damage,” Anastasia says, “we decided to ‘switch tracks’ for a few weeks, to help the local PCA church serve its community.”

It was as if God decided to protect our campus for the express purpose of serving needs in our community.
Tweet

Also on the initial team was Lenny Faria, a Crisis Response staff member who basically conducted an East Coast tour to be on the scene: driving with a friend from Massachusetts to Pennsylvania to pick up a trailer; then detouring to New Orleans to pick up a skid steer before arriving on Hilton Head island just before officials opened the bridge to outside traffic.

Arriving shortly after them were Rob and Jackie Passer, who had recently closed down an ongoing Hurricane Sandy relief station on Staten Island, New York.

Everyone began tackling a growing list of crucial tasks—everything from making personal connections (helping assess homeowner requests and offering to pray), to manning chainsaws and assisting church staff members with the incredible mountain of paperwork related to the cleanup efforts. Within a week, EFCA volunteers from Minnesota and Montana had joined those two couples. The growing partnership processed requests for assistance from close to 300 families, deployed chainsaw teams, and received and distributed a wide variety of relief supplies. The church also put its kitchen to use, serving thousands of meals.

As of this publication date, the combined EFCA/Presbyterian team has cleared approximately 160 of those estimated 300 requests for assistance. And the EFCA has committed to walk alongside the church for at least the next year through the continued cleanup, home repair and relational outreach. So volunteers will be needed on an ongoing basis.

An elderly native islander brought her family to the church after watching what was happening. She said that she “wanted to be with Christians who obeyed the voice of the Lord, not just talked about what He had to say.”

The cross-denominational teamwork has indeed been powerful. “It breaks old denominational barriers and creates a kingdom worldview,” Nelson Fuentes says. “I think we are making God smile.”

And others are smiling too. “I truly am amazed to the point of silence,” Bill McCutchen says, “as I consider God’s severe kindness to bring [the EFCA] team here to partner with strangers.”

More help is needed. Learn about making a donation or joining the team on Hilton Head Island. And follow the work of ReachGlobal Crisis Response via the ministry’s blog.

Daniel Smith is a freelance writer and career officer in the Navy. He blogs at sdanielsmith.com.