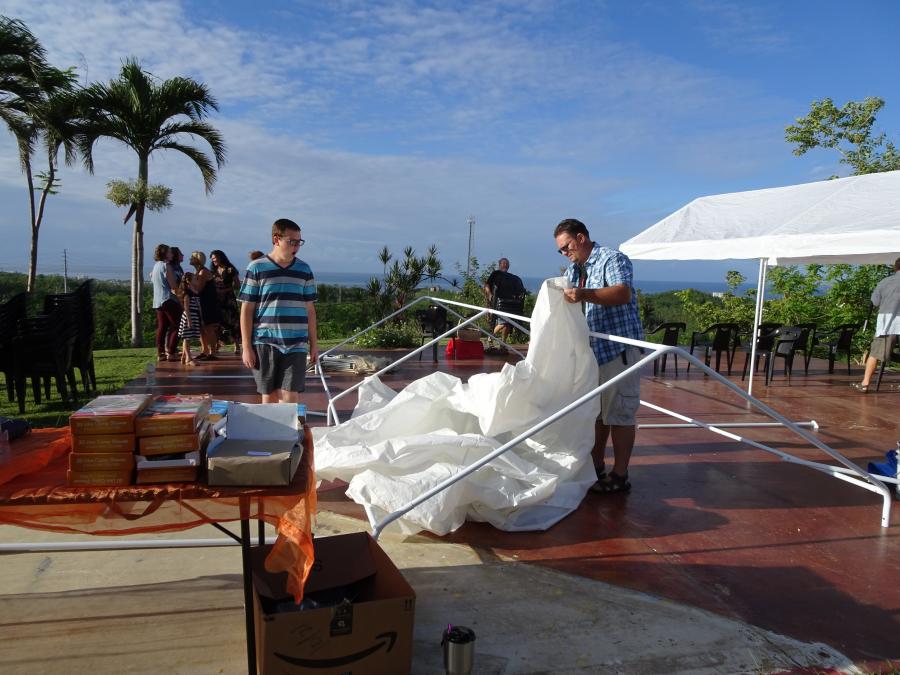 When All That’s Left Is the Floor

Hurricane Maria could not defeat this church.

As Hugo and Greg prepared to land in San Juan, Puerto Rico, they had little idea what to expect. TV news coverage had painted a bleak picture: The double punch from Hurricanes Irma and Maria two months earlier had been catastrophic.1

Somewhere down there was Church Without Walls, an Evangelical Free Church congregation in Rincon, about 95 miles outside the capital. Hugo and Greg’s plans were to encourage church leaders and serve in any way possible.

Puerto Rico is part of the EFCA Southeast District, and so as Hispanic ministries director for the district, Hugo Concha repeatedly tried to get a ticket to the island. Finally, he was able to fly there with Greg Cole, Florida businessman and former church-plant catalyst for the district.

EFCA Now spoke with Hugo and Greg about their early November visit.

What did you expect to see when you arrived?

Greg: We both came with the expectation of there being nothing. San Juan had electricity. But as we drove to Rincon, what was supposed to be a little more than a two-hour drive took four hours.

When we got to Rincon, reality hit. These people had not had the privilege of a warm shower in six or seven weeks. Some had running water because they had generators, but no one runs them 24 hours a day because they can’t afford the fuel. I was also surprised that the grocery store was fully stocked. But without electricity, you cannot pull out cash from the ATMs. Speculation is that schools may not open for six to 12 months. Houses that weren't concrete were especially damaged. In the photo at top, church members set up tents for church, now that their building is gone. Photos by Hugo Concha

Our goals were simple: connect with the elders and key leaders, and learn their needs and how we might come alongside them. They don’t have a pastor right now but three elders who rotate responsibilities. As soon as they learned we weren’t there to take control, they had open arms. And our simple goals shifted to a warm embrace.

Hugo: I expected to see the congregation as very sad, defeated, needy. Yet, on Sunday morning the service started at 8:30 and the people arrived maybe two hours before that to put together some tents [shaking his head]. It was amazing to see. They had lost everything—everything you use to do ministry—but they started right away with a service, serving the community. A lot of their congregation are [now] in the states. But they are not waiting on anybody—only trusting God and continuing to serve Rincon.

Greg: Right after the hurricane, a few people decided to take food down to the public beach and hand it out. That idea quickly spread, and the church has now done that every Saturday. I heard stories of church members walking the streets of their neighborhoods, checking on people and assisting in any way necessary. Every Saturday since the hurricane, church members have distributed free lunches at a neighboring beach, inviting community members to also consider Scripture with them.

They’ve adopted this mantra of never giving up. For me, that’s overwhelming. That’s been a mantra of my family and my ministry. So it was very emotional for me. As we left Sunday morning I asked Hugo some questions and he couldn’t even talk. He was very choked up too.

Greg spoke at the Sunday service, under temporary tents set up on the church’s concrete platform. Church Without Walls had previously been a structure with a great open worship space under a sturdy roof, plus an attached, enclosed storage area for necessities such as a sound system. But the walls truly came down in Maria’s fury, leaving nothing but the detached building used for children’s ministry, which sustained significant roof damage.

How did church members respond to your visit?

Hugo: They were so emotional when we said, “Did you know the church and people in the states are praying for you all this week?” You could see the people start to feel, We are not alone here; we have family around the world who are praying, who are caring for us. Church goes on, whether you have a permanent roof or not, because the body of Christ is gathered.

Greg: As we were leaving, one woman grabbed hold of Hugo, then me, and was weeping. She said, “Please come back. Please pack all your boxes and furniture to move here and be with us.”

We honestly and truthfully did very little. We just connected. We didn’t build anything; we didn’t bring thousands of dollars of material. We just loved on them; that’s all we did.

What are your plans for future help?

Greg: The people in the church all had damage to their homes, and they are without water and power.2 So Hugo and I kept talking about building and buying material. But they kept saying, “Can we have training for leadership?” They’ve never had official or even unofficial training, so that’s the first thing we scheduled.

Hugo: They want to be trained to be better leaders in the church. That means a lot to me. Sometimes people can be, “Give me, give me.” But this says a lot about the heart of the leaders of this church. Greg: After their pastor resigned, they wanted to be a shared elder leadership team without a vocational pastor, so they’ve been trying to figure things out on their own. I flew back to the island the day after Thanksgiving, and on December 1-2 we’ll be doing training for the elders and the leaders. Then, the goal is to have a construction crew fly in so that after Sunday’s service on the 3rd, the crew can begin on the children’s ministry building.

What do our U.S. EFCA churches need to know?

Greg: The elders in Rincon are putting together a list of what’s needed for both the short term and the long term—everything from a generator to new socks. We’ll ask U.S. churches to help fill a 20-foot shipping box in Jacksonville, then ship it down.

We see this as an opportunity to build relationships that will extend way beyond the recovery. Together with the church, we’ll begin to plan outreach events to help the church reach into its neighborhood.

To help our sister EFCA congregation in Rincon, Puerto Rico, contact Greg Cole for an update following his trip there in December. Or revisit the EFCA’s initial announcement to see more of the initial damage to the church and learn how you can give.

1Puerto Rico’s damage estimates range from $30 billion to $95 billion. In addition to more than 50 deaths directly attributed to Maria’s September 2017 hit, no one agrees on the exact number of fatalities, since those people dying later of water-borne illnesses or due to poorly staffed hospitals were not included in initial counts.
2In this part of the island, a lot of homes were made out of 100-percent concrete. Those buildings did not blow away. Flooding was not as prevalent as in other areas. Those who have roof damage or no roof at all have covered the damaged area as best they can with blue tarps and are either living there or have temporarily moved into the homes of friends.