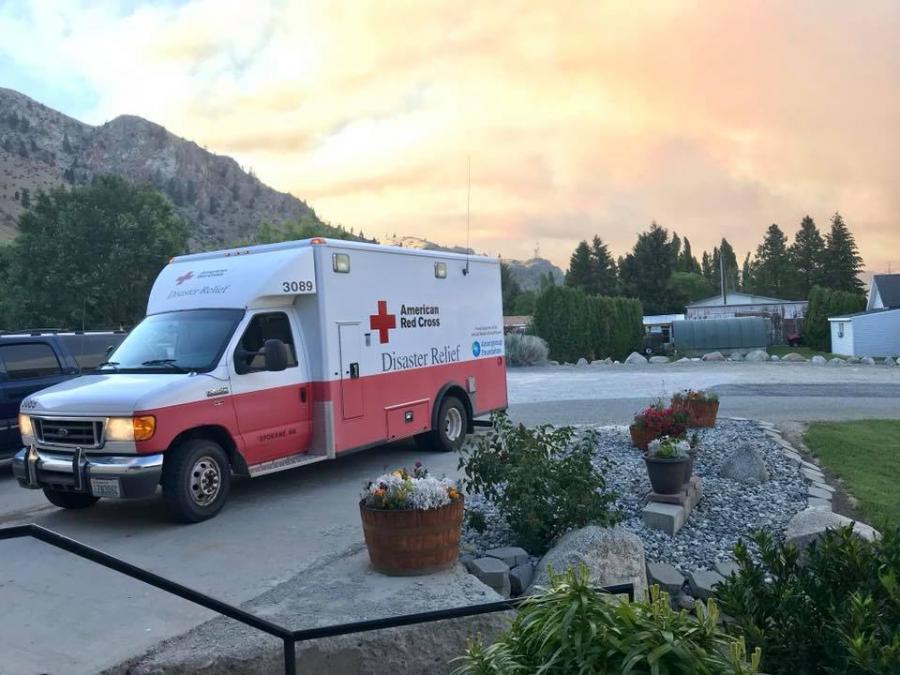 Offering Shelter to Those Fighting Wildfires

How one church in Washington became a haven for its community

One early morning this past summer, as I was watering roses at the parsonage, I turned my head toward the roaring sound of large water trucks. The trucks carried firefighters and were followed by one forestry truck after another. It was an unusual sight here in Entiat, Washington. I’m used to traffic on Entiat River Road, but this was different.

About 21 miles away, a wildfire was raging. The trucks and firefighters were headed toward the Cougar Creek fire. Our state of Washington has witnessed more than 1,100 wildfires in 2018, breaking a historical record. On this particular morning, it was the first few days of this latest fire, and the crisis was hitting close to home. Smoke filled the morning air. I turned toward the house and saw the sun rising, but the smoke in the sky gave it a pink hue. I noticed that one of our neighbors was already wearing a mask due to the heavy smoke lingering in the air.

Sunrise during the wildfire in Entiat, Washington.

I was up early to work in the yard before heading to our church. My husband, Barry, serves as the pastor of Entiat Warehouse Community Church (EFCA), or “The Warehouse Church,” as some locals call it. EWCC is known for biblical teaching and extending a helping hand. But we’ve only lived in Entiat for a few years and had never experienced a fire like this. I sensed that this fire would be a challenge—and an opportunity—for our community.

The chance to serve

We were given the chance to help when the Red Cross contacted our church on August 2, 2018, about the possibility of the church serving as an evacuation shelter as the fires continued to grow.

Barry and I wondered how prepared our church was to respond to this need. When the church leaders learned that the fire was growing, they were more than willing to help, but we all wanted to make sure we were prepared. In the past, EWCC had provided housing and support for firefighters, but partnering with agencies like the American Red Cross would be new. All we knew is that we wanted to help in any way we could.

In the end, Barry and Yuka Sanford, our youth director and administrative assistant to the EWCC elder board, did not hesitate and gave a definite yes to the American Red Cross and the firefighters. How could we say no? Serving our community is what we are here for. This opportunity brought to mind a passage from Hebrews: “God is not unjust; he will not forget your work and the love you have shown him as you have helped his people and continue to help them” (Hebrews 6:10). Prepared or not, EWCC would be available to help.

In 2014, the Mills Canyon night crew firefighters used EWCC and rested there during the day. EWCC also collected and sorted clothing for delivery to residents in Pateros, the community most affected by the fire. So, when the Red Cross visited our church to consider it as a possible evacuation site, Barry and Yuka were not surprised.

A haven for firefighters

This fire, however, seemed different from those in the past. A few days after the August 2 Red Cross visit, the first evacuees started to trickle in. In the first two weeks of August, there was a lot of activity in our little town. Firefighters moved in, sleeping in more than 50 small tents on our high school football field. The command center was bustling at the high school. Smoke changed the activity level of residents, and evacuees were moving cars, trailers and livestock to other areas.

As the fire changed and moved, the Entiat community welcomed firefighters from across the nation and from other countries as well. They worked the Cougar Creek fire as well as the Lost Fire and Bannock Lakes fire. Firefighters faced rugged terrain, gusting winds and soaring temperatures as they battled the flames daily.

As a church, we became a Red Cross shelter and a daytime sleep location or camp base for night crew firefighters on August 17. We housed 180 firefighters. Firefighters entered the church covered in soot, thankful for the coffee we provided and a place to rest. The men slept downstairs in our church classroom area, which was once a cold storage area in a fruit warehouse. It was cool and dark, perfect for firefighters needing to sleep during the day. The women slept upstairs in our fellowship hall. One firefighter even joined us for our church service on Sunday.

One day, we took toiletries and other items downstairs to where the firefighters rest. We were always careful to protect their privacy and leave them alone as much as possible. When the firefighters get a spare moment, they text or call their families. As we dropped off the items that day, I noticed how little they travel with. Most do not even have pillows with their sleeping bags. One just had a bottle of water where a pillow should be. As a church family, we provided toiletries to the firefighters and those driving water delivery trucks, preparing bags that contained toothpaste, toothbrushes, shampoo and conditioner.

Giving what we had

Although the fire burned nearly 40,000 acres, the Cougar Creek fire is now contained. Firefighters remain in Entiat, but many have moved to Leavenworth, Washington, to continue to monitor the area.

EWCC is a small church, but we were grateful to be able to give what we had. The memories of this summer’s wildfire are still vivid. Red Cross workers helped an elderly man evacuate with his dog and two cats. He arrived at our church with his two cats in crates and preferred to leave them in his car that night. Barry and I slept at the church that night in order to help out. The man allowed his dog to stay inside with him for a few hours, and we became acquainted with them both. During that time, we also watched relief spread across the faces of an evacuated family when we told them it was OK for them to park their trailer at our church. Corky, a man who drives a water delivery truck, stopped by recently to thank us again for allowing him to park his trailer in our parking lot during the fires.

We kept one note from a woman named Kim, a Red Cross worker, that read: “You have a wonderful church family that is very gracious, sharing, kind and compassionate. Thank you for showing Jesus to your community by opening your building.”

A building that builds community

During the busy days of ministry, we all need to remind ourselves of why we do what we do—even when we are not in times of community crisis. All of our labors are for the Lord. As the writer of Proverbs reminds us: “Do not withhold good from those to whom it is due, when it is in your power to act” (Proverbs 3:27). Any church of any size can be of help in a crisis.

Barry and I love serving at EWCC, and we are grateful for the church’s long-standing history of helping our neighbors. Our building is merely a ministry tool. We are thankful that the Lord has given it to us to help others.

Learn more about how your church can be prepared for a crisis and how you can mobilize to help others through EFCA Crisis Response. Crisis Response is also willing to come train churches on how to prepare for crises in their own cities; email us to learn more: crisisresponsetraining@efca.org. Stay in touch with the Crisis Response ministry and hear about what God is doing in the wake of crises around the world by signing up for the Crisis Response newsletter.

Ellen Mooney serves at Entiat Warehouse Community Church (EFCA) in Entiat, Washington, where her husband serves as the pastor. She has written for EFCA Today and worked as the publications director at Central Church in Collierville, Tennessee; as layout/design editor for Encounter Ministries, Inc., and as a PR specialist at Lausanne Collegiate School in Memphis, Tennessee.