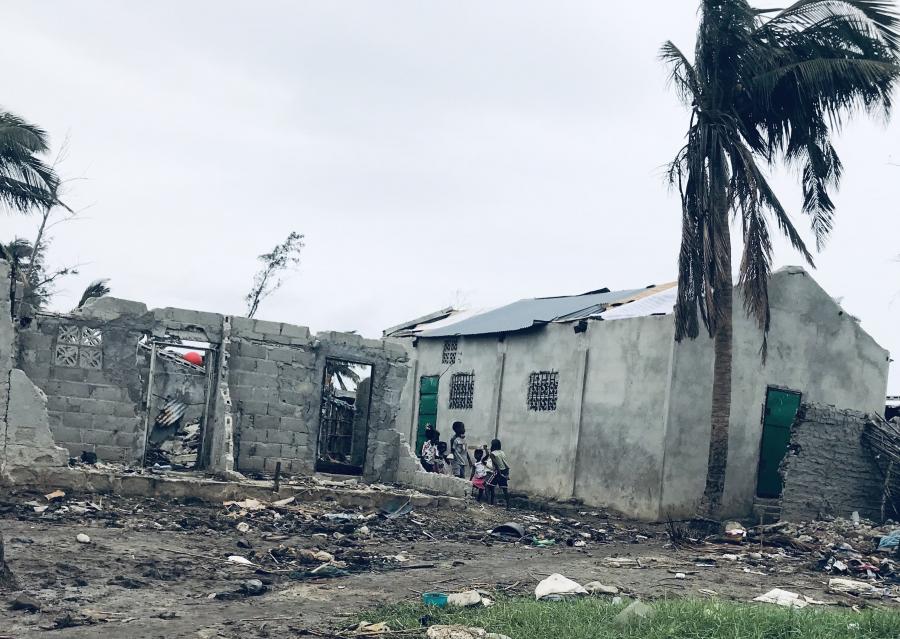 Saying "Yes" in the Face of Fear, Doubt and Devastation

God is at work in the most devastated places of Mozambique

News of Hurricane Dorian put Crisis Response into action days ago. They are in contact with the Southeast District, EFCA churches and church partners along the Georgia, South Carolina and North Carolina coast. Crisis Response is carefully monitoring the storm, is poised to act and will provide updates as damage is assessed.

In March and April 2019, two cyclones struck Mozambique; Crisis Response sent personnel to assess the damage and to bring resources and encouragement to the people effected by the storms. One of them, Jennifer Hand, tells about her experiences with Crisis Response and her time in Mozambique:

Several years ago, the Lord dropped this phrase on my heart:

“Will you live with your yes on the table for me Jenn?”

Every morning since then, I wake up, have a few sips of coffee so I can think clearly and whisper these words:

That “Yes” has led me to places that fit my background and experience as well as places I would never have expected to go. A few years ago, that “Yes” led me to a partnership with the ReachGlobal Crisis Response team to serve in post-earthquake Nepal. I had previously served in Nepal and spoke the language; the people were part of my heart.

Since that trip, Crisis Response has become my family. I have served with them as a short-term missionary in Nepal, Houston, Louisiana, Ecuador and continue to help equip Crisis Response staff at their annual training events. Homes were destroyed and people put together shelter with whatever they could find.

Watching the news one morning this spring, I saw the devastation that two cyclones wrought on the country of Mozambique. Cyclone Idai was first, making landfall in March 2019. Cyclone Kenneth followed hard on its heels in April 2019. One after the other, they brought a double whammy of torrential rains, 100+ mph winds and storm surges. They wiped out villages and washed away roads, fields and hope for the future. They were responsible for more than 1,300 deaths and forced more than 1.8 million people out of their homes.

God is moving and shining His light in the midst of extreme crisis in Mozambique.
Tweet

As I watched the footage of the cyclones’ destruction, what captured my heart was the look of trauma in the eyes of the people who were trying to live amid the flooded remains of their homes and villages. By the next week, I found myself heading to Mozambique. While many of the details of my trip are not mine to share, let me give your heart a window to show you how God is moving and shining His light in the midst of extreme crisis in Mozambique.

Crisis Response partners with several groups including the mission agency of the Evangelical Free Church of Brazil (AMEL), the Alliance Mission of the Evangelical Free Church of Germany, a local Mozambican seminary, Instituto Biblico de Sofala, and several networks of national churches. Missionaries from these organizations and local church leaders have a well-developed ministry philosophy and partner with Crisis Response in strategic ways.

One effective strategy is to focus on getting food to those who are starving by first delivering the relief supplies to the pastors of the local churches, who then distribute the food to the people in the village. This gives each pastor an opportunity to relate with those affected in his community and listen to their stories. They also empower the local leaders, who almost always know the people who have real needs. The infrastructure is badly damaged, blockades were put up for security.

Once I arrived in Mozambique, I was partnered with a resourceful, multi-cultural team of Brazilians and Americans. They were from the groups serving in Pemba, a port city in Mozambique, where most of the homes and people’s livelihoods had been destroyed. These Mozambicans live off of the land, which had been broken, tumbled, cracked, stripped and left bare. Fields were flooded, crops, tools and the seeds for the next planting were all washed away. Clean water was scarce. The people were starving.

Worse, it became clear that getting to the people most severely affected by the cyclones would not be possible. A militant group had been active in the region and their terrorist activities were spreading great fear.

This group had killed several people who were bringing aid, so the government would not let anyone with a foreign passport past a certain point. However, the mission team with which we partnered found innovative ways to access this area. They often worked with local Mozambican leaders, who helped them circumvent the blockades to get aid to those in need. The cyclone made rubble of anything in its path, cleanup is difficult and massive, and resources are scarce.

In one instance, a missionary navigated into this region, bringing desperately needed food and resources to a Mwani village. The Mwani are an unreached people group who have about five believers to every 200,000 people. The aid included audio bibles that need no electricity or batteries, plus, the New Testament had recently been translated into the Mwani language. When another missionary arrived later with more aid, he found the whole village gathered at the chief's house, crowded around that audio bible. They were all hearing the Word of God for the first time!

When a missionary arrived, he found the whole village gathered at the chief's house, crowded around that audio bible. They were all hearing the Word of God in their own language for the first time!
Tweet

While I expected to help with reconstruction and distribution of food and resources, my main work became counseling the people in the village–including the missionaries and leaders of ReachGlobal Crisis Response’s partners. They needed help to deal with the intense fear and real threat of the militant group. The people in the villages and the missionaries seemed to be dealing with the post-cyclone emotions much better than the terror of this group and their activities.

This was especially true for the missionaries. My solution was to set up shop at a nice restaurant that had a breakfast buffet, which made the missionaries very happy. I bought them a meal every day and helped them work through their fears and trauma. One of the best ways to help your brain and body after experiencing trauma is to share what you were thinking, feeling and experiencing during the traumatic event. This helps release the emotions that can become locked in the body. A gathering to worship and pray.

One night all the female missionaries in Pemba from each different organization with whom ReachGlobal Crisis Response partners came to the place where I was staying. I led them in a three-hour group debrief/prayer time/encouragement. Our time together became holy ground as they opened up not only about their trauma experiencing the cyclones, but also the situations in their respective villages.

How you can say “yes”

These are a few examples where you can see how God is at work behind the scenes in Mozambique. These are stories you won’t hear on the news. God is moving. God is using his “Yes” people to shine light in dark situations.

I offer my “Yes” to Lord every morning, yet, the enemy could tell me I do not have much to offer. After all, I am one 37-year-old woman who went to a country where I did not speak the native language, to a place I had never visited, with only a small drop of resources to pour out to the people there. What could I do? The enemy of our souls uses lies like these to immobilize us and paralyze us.

I said “Yes,” however, even though it was not a convenient time for me to drop everything and go. Nor did I have the resources I needed to go, but God has unlimited resources. You may find yourself paralyzed by fear of the unknown and the unseen, but that morning I woke up, swallowed my first sip of strong coffee and whispered the prayer, “My Yes is on the table Lord,” God was working to send me to Mozambique.

Is your "Yes" on the table? For the people of Mozambique, life continues on; a young man makes his way through the devastation wrought by the cyclone.

Do you want to be someone who is known to respond with a “Yes?” When opportunities to serve God present themselves to you, how will you respond? Your “Yes” can take on a variety of different responses. Here are some ways you can say “Yes”:

One way you can respond is to give, so that ReachGlobal Crisis Response can equip and support missionaries and local churches. Crisis Response has a strategic response specifically for this purpose.

Pray that God will use the sacred ground of suffering to show people their hope in Jesus.
Tweet

Another is to go—pray about when and where God might lead you to go. Crisis Response has a wide variety of opportunities in the U.S. and globally, short-term or long-term.

And most importantly, grow your prayer life as you pray for those who are in crisis. Pray that God will use the sacred ground of suffering to show people their hope in Jesus.