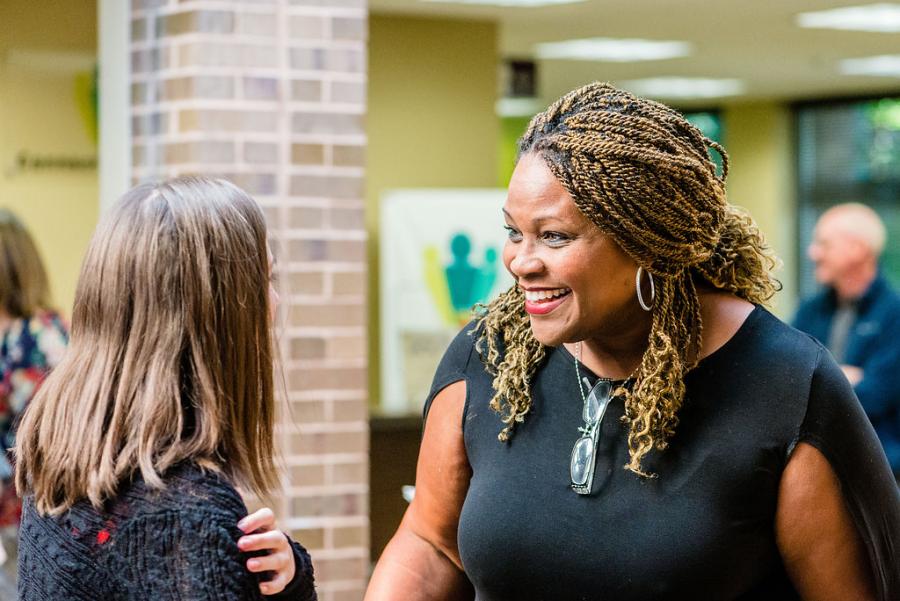 How one church fights for unity

In her book The Worship Architect, Constance Cherry insists that “corporate worship is not what takes place at a given church simply because an aggregate group of individual worshipers show up at the announced time of service.

“Rather, corporate worship is what happens when the body of Christ assembles to hear with one heart and speak with one voice the words, praises, prayers, petitions, and thanks fitting to Christian worship.”

But how does a very diverse congregation in the most diverse city in the United States1 work toward this sort of oneness?

From its beginning in 1989, Seneca Creek Community Church (EFCA) has maintained a consistent outward and multicultural focus—reflecting its location in the vibrant D.C. suburb of Gaithersburg, Maryland.

According to its lead pastor, Mark Tindle, the church does not track its demographics or set targets for a certain level of diversity. Yet Mark estimates that whites make up 40 percent of Seneca Creek; African Americans, Asian Americans, Latinos and Africans make up much of the rest. The church’s diversity includes socioeconomic diversity as well.

In its worship services, Seneca Creek utilizes songs in multiple languages and provides translation of sermons into Spanish and French—reflecting some of the beauty of what the Church will be one day: “a great multitude that no one could count, from every nation, tribe, people and language” (Revelation 7:9).

While certainly a beautiful foretaste of the New Creation, diversity in gathered worship does not imply unity in the church. “Diverse people bring conflicting opinions, and not everyone is open to navigating the messiness,” observes Jeannette Cochran, executive pastor. “Diversity means that relationships are often hard work,” agrees Jonathan Der, student ministry pastor. “They require time and sacrifice and humility, which yield wonderfully rich connections and complexities—often absent from the monocultural contexts in which I previously served.”

People at Seneca Creek have to fight for unity, especially when cultural currents threaten to divide them.

From cultural flashpoints to critical moments

In Christ, we are first and foremost allies, even when enmity threatens to divide and conquer us.
Tweet

Take Baltimore, for example. In April 2015, Freddie Gray, an African American man, died as a result of injuries sustained while in the custody of Baltimore police. As news of Gray’s death spread, so did the protests and riots.

While not directly affected by those physical demonstrations some 50 miles away, Seneca Creek certainly experienced heightened tension. In the midst of the unrest, Mark knew that he needed to remind the congregation from the pulpit of their “call to love one another.”

He had already planned a panel discussion for the Sunday service—a format that Seneca has found to be a powerful tool so that the congregation can “listen to people from different backgrounds.”

On that particular Sunday, Mark had invited three African American church members to share their perspectives during a series on the Resurrection. “We were attempting to understand how the reality of the Resurrection changes everything about life, including our relationships—how it tears down ‘the dividing wall of hostility’ that so often separates us” (Ephesians 2:11-14).

The panel was planning to help the congregation wrestle with questions such as, “What is it like to be part of a minority culture?” “What do we need to know? “How can we grow?” “How can we process together?”

It was only natural, then, for the three panelists to specifically address what was happening in Baltimore and the related racial tension.

Dianne Jones, a 12-year member of Seneca Creek, served on that panel and appreciated how it conveyed “that people of color are valued and their voice is important.” But she also recognized that having three black people on a panel on race does not do justice to all sides of the story.

“We need to expand the discussion,” she suggests, “to expose the myths, prejudices, lies and truths about each other and take the time to get to know one another personally.” You can't help but feel like part of the Seneca Creek family when greeter Abram Primus says hello.

According to Mark, listening is a necessary first step to understanding and loving one another. From time-to-time, he gathers a focus group of six-to-10 people of various cultures to help him grow and learn about a topic from multiple vantage points.

In addition to listening, Mark acknowledges, some tough conversations are needed—not only in the row or pew but also around the dinner table.

To help model that, Seneca Creek has made some intentional changes to bring greater diversity to its small groups. Real friendships can now give context to all the cultural conversations and flashpoints. “‘Black Lives Matter’ is no longer just a slogan,” says Jeannette Cochran. “It’s a commitment to solidarity with my courageous, tenacious, resourceful black brothers and sisters. Immigration is no longer just about policy and law. Now it’s about my brave, hardworking, compassionate friend.”

From elections to allegiances

Jesus Christ is ultimate. Oneness in Christ is essential.
Tweet

The recent presidential election also proved to be a flashpoint at Seneca Creek. Mark recalls a palpable fear among some congregation members. He heard that fear seeping into conversations and thought, I can’t not address it.

The Sunday after the election, Mark preached two mini-sermons, reminding the congregation, “We’re called to be a community who lives differently as Jesus followers.”

At one point, he asked people who felt afraid in the wake of the election to stand. Then he called out to the rest of the congregation, “Stand with your brothers and sisters.”

Mark hoped that visual picture would convey the essential truth: Living out the resurrection of Jesus Christ means promoting reconciliation, and in the church, that means loving one another despite political differences.

Church members then laid hands on and prayed for those who acknowledged being afraid. In the hustle and bustle before and after services, Cathy McNair (at right) leads the welcome team that makes sure people don't get lost in the crowd.

These flashpoints, charged with racial tension, have threatened to divide Seneca Creek, pitting neighbor against neighbor. But the church leadership has continued to point the congregation to the gospel and to the theological reality of the unity of the body of Christ. Even in the potentially contentious panel discussions, the focus is on Christ and oneness in Christ.

Racial, ethnic, cultural and political identities are significant, yet they are not ultimate. The apostle Paul reminds believers: “In Christ Jesus you are all children of God through faith, for all of you who were baptized into Christ have clothed yourselves with Christ. There is neither Jew nor Gentile, neither slave nor free, nor is there male and female, for you are all one in Christ Jesus” (Galatians 3:26-28).

Jesus Christ is ultimate. Oneness in Christ is essential.

Seneca Creek points us to the reality that, regardless of our allegiance to a particular cause or campaign, the gospel prioritizes allegiance to Christ and His Church. As brothers and sisters in Christ, we are first and foremost allies, even when enmity threatens to divide and conquer us.

Meryl Herr earned both her Ph.D. (Educational Studies) and M.Div. from Trinity Evangelical Divinity School, then served as a pastoral fellow at Christ Community EFC in Leawood, Kansas. She now lives in Grand Rapids, Michigan, with her husband and two sons. Meryl is a consultant and an adjunct professor at Cornerstone University and Trinity Evangelical Divinity School. Building on a Firm Foundation