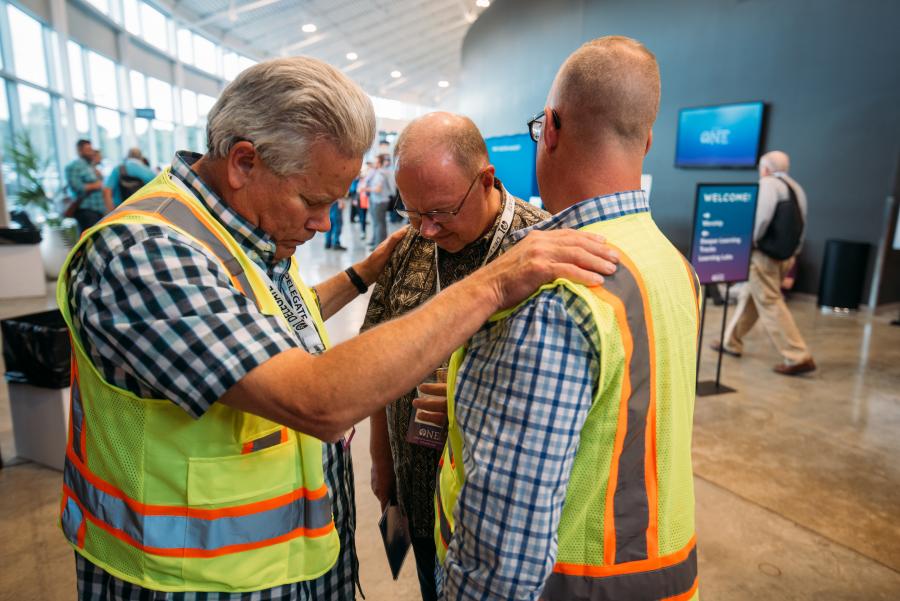 Setting the Pace for Prayer at EFCA One

Prayer was happening everywhere at EFCA One 2019. On the stage, behind the scenes, in the halls, in the parking lots, in the classrooms and in the corners. In fact, I coordinated a team, the Prayer Pacesetters, whose sole focus was prayer at EFCA One, and it was hard to miss us.

As we do at EFCA events, the Prayer Pacesetters wore neon yellow construction vests with the words, “Prayer Pacesetter” spelled out in bold black letters on our backs. This is a way of encouraging people to identify a Prayer Pacesetter as someone you can go up to and say, “Hey would you pray with me?”

At EFCA One, I prayed over a ReachGlobal missionary who wanted clarity in his call and future. The things we prayed over him were encouraging and affirming, and afterward he said, “That’s exactly what I’ve been wrestling with, and hearing from the Lord.”

I coordinate and head up the Prayer Pacesetters at EFCA events. It all started about eight years ago with the Challenge youth conference. We were there to provide prayer during each of the nine main sessions. We were also available for youth workers and youth groups to pray for people’s particular needs and to come alongside efforts in the city where the Challenge conference was held.

It has grown in scope since then. Volunteers for Prayer Pacesetter teams come from EFCA churches across the country. Currently, we have a roster of 25 people who have participated. They’re ordinary people–half of them are lay people.

Prayer Pacesetters are people God has called to prayer. They have a heart for prayer in their local church experiences, an intimacy with the Lord in their praying and they pray with confidence and courage. Others are drawn to prayer because of them.

With a total of 15 people, we had five teams of three people at EFCA One and we prayed in various ways for the worship services, the sessions, speakers, teams and individuals. We prayed for the business session multiple times. We had four teams pray at each worship service, and throughout the service one team prayed in a remote room that was designated specifically for prayer. At the end of each worship service, we made ourselves available to pray for individuals. We had a remarkable response to this, beginning with the first message from Colin Smith, senior pastor of The Orchard Evangelical Free Church.

"That's exactly what I've been wrestling with and hearing from the Lord."
Tweet

After Colin Smith’s message, each Prayer Pacesetter team had many people asking for prayer. So we knew it was “Game on.” The Spirit of God was moving, people were coming to us asking for prayer under conviction of the message out of Mark 8. After this worship service a man came up to me and said, “I feel like God is breaking me.” I prayed a prayer of strengthening for him.

That was one of the many ways we prayed for people. We also had prayer walk-ons, spontaneous divine appointments and signups. At the conference, people had a chance to sign up to be prayed over for 15 minutes. We had a room set aside for that, but while we were at the conference, people just started coming up and asking, "Would you pray for me?”

We had nine sets of people who did this on Thursday, so we put them wherever we could find room, the corner of a hallway, the balcony entrance into the worship center behind the doors. That was a nice problem to have.

The bright yellow vests we wear also make a fun marker point–they can be humorous. While wearing the vest, I’ve been asked to help with parking, to clean up a spill and for bathroom supplies. I respond by saying, “I’d love to help, but this vest identifies people who will pray for you.” Then I turn my back to show them the ‘Prayer Pacesetters’ emblazoned on it and I say, “Hey, can I pray for you?”

The people who participate as Prayer Pacesetters have a call for prayer, however, they are all unlikely suspects. We didn’t wake up one day and say, “I want to be a person of prayer.” Jesus chased us down and said, “I’m going to give you this.” Most days we love it, but there are days we don’t. The point is, if I’m an unlikely suspect, can I boast?

Michelle Hill started early on as a Prayer Pacesetter at an EFCA Challenge youth conference. A 911 dispatcher by trade, she says, “I’m an official yellow vest wearing prayer team member.”

Her participation began when I emailed Michelle’s pastor about six years ago asking if he knew of anyone who would be interested in coming to pray for the students during EFCA Trinity week in February. He suggested Michelle, and she's been a part of Prayer Pacesetters since then. Susan Olearnik, Michelle Hill and Diane Wieranga with Fritz Dale in the Prayer Pacesetters room at EFCA One 2019, the Compass Church, Naperville, Illinois.

Michelle says she likes the spontaneous divine appointments. At EFCA One, she said, “I walked around praying specific things for people, as God put them on my heart.

“For example, I’d walk by someone and say, 'Oh that’s a beautiful blouse,' and that would start a conversation. Soon, I’d ask, ‘How can I pray for you?'”

Susan and Mike Olearnick were also part of this conference’s Prayer Pacesetter’s team. Plus, this was their first experience at an EFCA conference.

She told me that, “Our pastor," Alan Kraft, lead pastor of Christ Community Church, a multisite EFCA congregation in Greeley, Colorado, “called us to be on the prayer team for EFCA One. And I told him, ‘Well, let’s pray about that.’ And then, we felt like we were supposed to be here. I’ve seen some groundbreaking stuff. I think it’s going to have a big footprint.”

Susan and Mike have a heart for prayer. They are part of their church’s prayer experience. “Every Sunday we have a two-hour time period where people can come for prayer. We give them 15 minutes, but really, we just start praying, and we don’t stop until we’re finished.

“We came to EFCA One to pray for people, for the leaders. My heart breaks for them–the leaders–they’re not supposed to hurt, but we hear their cries, and we love them.”

Michelle said she agrees with that, “It’s been a blessing to the leaders who need that ministry because they’re pouring out all the time.”

And I also agree. These leaders are deeply invested in ministry and they need prayer. It strengthens and affirms them, in addition to glorifying God.

Volunteers from the Compass Church took part in the prayer team as well. Diane Swierenga, who’s attended Compass Church Wheaton campus for 40 years, told me, “I like prayer because I like to see how God works.” She’s involved in the church’s Wednesday night prayer meetings, is a liaison with the missionaries and is the prayer coordinator for the church’s three services. Diane is an experienced woman of prayer, who has an intimacy with the Lord in her praying. She'll tell you, “I’ve had a need for prayer in my life because of all the ups and downs."

When we’re at a conference, the Prayer Pacesetters are in the midst of the flow of it. We go to people. I walked into two classrooms where I saw people and asked if I could pray for them.

We pray over people who are in all sorts of different situations.

We prayed over five ReachGlobal Berlin members, for the team, the city, and the individuals. In our prayers, the Lord gave them words of encouragement and words of life that were specific for those individuals and their team and city.

We prayed for another person who was struggling with self-doubt and guilt in terms of both work and relationships and who said that over the past 24 hours she had felt a great sense of discouragement and depression. We prayed sharing scripture and encouragement, which dramatically transformed her during that time of prayer. She left feeling renewed, refreshed and clear on who she was and the calling God has given her.

"The prayer of a righteous person accomplishes much." James 5:16b
Tweet

Prayer Pacesetters are called by God and committed to battle–to wrestle– for the souls of people in prayer. This is grounded in scripture. A key verse is Colossians 4:12, “Epaphras, who is one of you and a servant of Christ Jesus, sends greetings. He is always wrestling in prayer for you, that you may stand firm in all the will of God, mature and fully assured."

Another key verse is James 5:16b, … "the prayer of a righteous person accomplishes much."

Our prayers were a big aspect of every part of this conference, as they are at other EFCA events. We prayed and we demonstrated prayer. People learned how to pray and our team deepened their knowledge of and experience in prayer.

Do you have a heart for prayer? Are others drawn to prayer because of your prayers?
Tweet

One important aspect is that we wanted to model what we know some of the EFCA churches do at the conclusion of their services, which is to offer a time of focused individual prayer for anyone. We demonstrated the practice, and priority of prayer and we’d like prayer like this to happen in all churches.

Do you have a heart for prayer in your local church? Do you enjoy an intimacy with the Lord in your prayers? Do you pray with confidence and courage? Are others are drawn to prayer because of you? These are the qualities I discern in people of prayer.

Prayer Pacesetters is an apt name for this group of people. They pray. They’re front runners, and they serve as a model to be imitated. They’re setting the pace for all God’s followers to run the race with perseverance.

Prayer is a priority, every day. Who can you be praying for today? Can you thank the Lord for someone who’s been praying for you? These simple questions are effective; they can help you as an individual in your praying. These are also questions to ask as a larger group.

Fritz Dale is director of leadership formation and prayer mobilization.