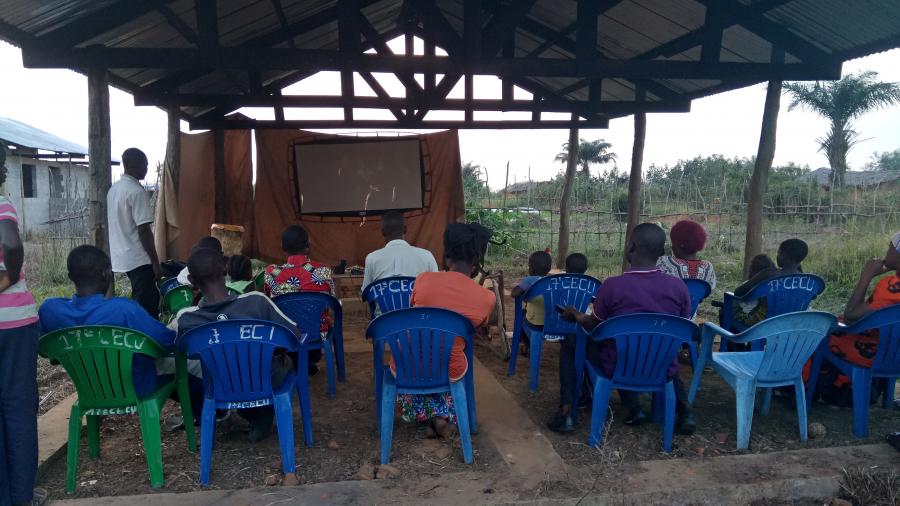 Bringing Hope to Those Living in the Shadow of Ebola

Ebola devastated West Africa from 2013 to 2016, but the horrific disease has not yet finished terrifying areas of the African continent. In May 2018, Ebola broke out in Northwest Congo and came to the attention of health officials in the region. Before the health crisis was officially declared to be over on July 25, it had claimed the lives of more than 30 people.

Situated along the Congo River, Mbandaka has a population of 1.2 million people and serves as a commercial hub for towns and cities from the east and from the north, linking much of the region to the country’s capital, Kinshasa. The majority of commerce still takes place on the river; there are few if any paved roads and only very limited air travel to Kinshasa. Although it is a heavily populated region, residents of Mbandaka live in deep poverty, with minimal infrastructure and no or very limited electricity.

There is a long history of the people of the Evangelical Free Church bringing the gospel to Congo.
Tweet

This summer’s outbreak of Ebola was first detected at a health center in Ikoko, a village about 40 miles south of Mbandaka. Some believe that the first cases were actually seen as early as December 2017, but because of the extreme isolation of these villages located in a dense tropical rainforest, the health crisis was not officially recognized until May.

Our partnership with the Evangelical Free Church of Congo focuses on coaching, training and mentoring leaders, and Congo is the origin of and the largest site for EFCA GlobalFingerprints. We remain very connected to the work of Tandala Hospital and the Elikya Center, which provides job training for many of the older children sponsored through GlobalFingerprints. (Learn more about the work of GlobalFingerprints in the Congo through the recent dedication of Promise Home, a home for children with special needs.)

Sharing the good news with an isolated people

I traveled to Congo in June, in the middle of this latest outbreak, to meet with denominational leaders in the area and Reverend Nubako Selenga, the director of ReachAfrica, to discuss response opportunities based on the resources we had available to us.

Local police and military officials were restricting travel to try to contain the epidemic. A normally busy, mobile people, those who lived near Mbandaka were detained and sequestered for four to eight weeks with virtually nothing to do. The fear of the unknown and the threat of a disease with ruthless symptoms that often proved fatal brought immense anxiety to communities. Facing eternity, they were a people without hope.

Throughout much of Africa, communities are driven by a worldview that is centered around fear and deception. The communities that surround the epicenter of the Ebola outbreak are easily persuaded that such a horrific disease spreads because Satan and his demons are all powerful. But when Jesus proclaims that all power and authority have been given to Him (Matthew 28), this truth can radically change people’s beliefs about eternity and about their everyday lives. The One who gives life in abundance has authority over the one who steals, kills and destroys (John 10).

In the end, 15 new believers came to faith in Christ. From this, a church was established and they now meet regularly, no longer fearful of the unknown.
Tweet

As we considered the geographic and social isolation of those who were trapped in their villages, an idea came to us. Last year, we were connected by one of our ReachGlobal staff to the Jesus Film in a backpack. Light and mobile, the kit allows people to travel with a projector, screen and audio to places not reachable with a four-wheel-drive vehicle. The film, based on the Gospel of Luke, tells the story of Jesus. There are more than 250 dialects spoken in Congo, and the film has been translated into many of them.

Traveling by river, a team from one of our local Free Churches went into one of these communities to show the Jesus Film. This village had no health center, no school, no church. Because of the threat of Ebola, fear had gripped the hearts of these villagers. But when they heard about the film, people showed up and responded to the powerful good news.

When we followed up, we heard of people who were earnestly seeking God. In the end, 15 new believers came to faith in Christ. From this, a church was established and they now meet regularly, no longer fearful of the unknown. There were four Evangelical Free churches in the Mbandaka region, but now, by the grace of God, a fifth church has been planted.

Thank you to those of you who contributed to our crisis response to Ebola and who helped make this ministry effort a reality. The ReachGlobal Africa Crisis Relief Fund can still use your help. This fund allows us to respond to crises where we are connected in ministry through our ReachGlobal staff or other ministry partners.

Having available funding in times of crisis allows us to see the gospel extended into communities of unreached or unengaged people. If you feel called to support our efforts, we welcome your prayers and your gifts. You can give online and enter the designation ReachGlobal Africa Crisis Relief Fund #2200-3988.

Lead photo caption: Residents in the Mbandaka region gather for a showing of the Jesus Film.

Jim Snyder and his wife, Ruth, served with ReachGlobal in Zaire from 1985 to 1996. After giving direction to EFCA crisis response teams, Jim returned to focus on ministry on the African continent and serves as a member of the division leadership team there. Jim and Ruth’s home church is First Free Rockford in Rockford, Illinois.