One Lord, One Faith, One EFCA

Reflecting on EFCA One 2019 and looking forward with hope 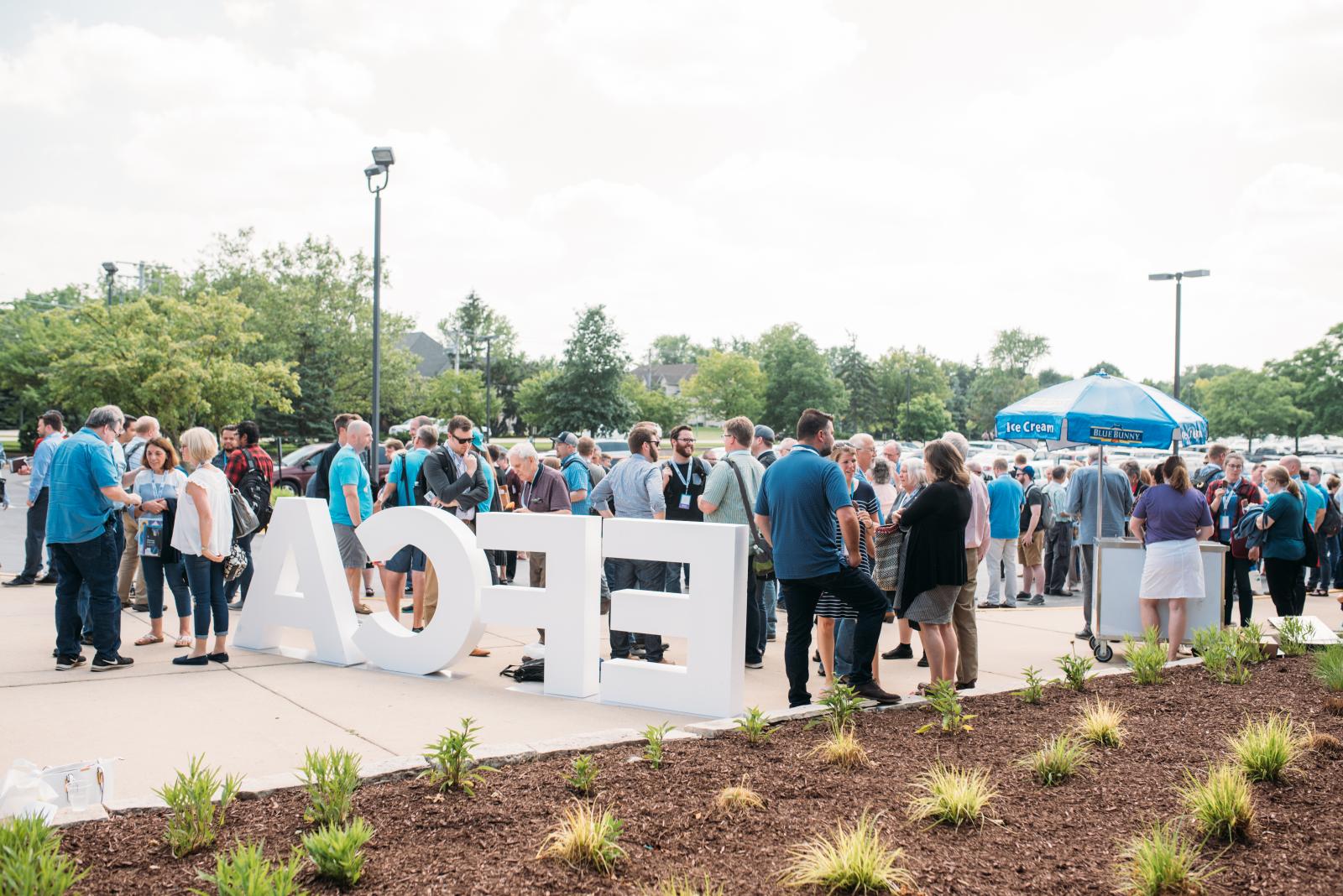 On June 18-20, 2019, believers gathered for the 132nd Conference of The Evangelical Free Church of America. 1,552 registered for the conference, which is the highest number of registrants we have had since 1998. Additionally, 1,230 were credentialed to vote at the Business Session, with the following ministries represented: 572 church delegates; 339 pastoral delegates; 125 commissioned ReachGlobal missionaries; 116 ministerial members; 36 general board members; 24 chaplains; 14 church planters; four tenured faculty.

The high numbers reflect both the decision that was before the conference—the Motion to Amend Article 9 of our EFCA Statement of Faith—and also the growing relational connections experienced across the EFCA, both nationally and internationally, the fruit of living out the reality of one EFCA. In the EFCA, doctrine is foundational to our relationships, and our relationships are grounded in doctrinal truth.

Our theme for the conference was multiplying disciplemakers. The ground of this command and commission is that we, as the people of God, have been and are being transformed. It is only from that spiritual place and posture that we will be able to multiply disciplemakers, which will bear fruit in transformational churches. This is disciplemaking beyond being a mere slogan.

Our prayer for EFCA One was that this conference might be a means God uses to bring about a change in the EFCA, both individually and corporately.
Tweet

Our prayer for EFCA One was that this conference might be a means God uses to bring about a change in the EFCA, both individually and corporately. Our God-prompted desire and prayer is that our lives and churches will be marked by evangelism and discipleship and that this way of life will become common and expected in our churches, which will overflow such that we will engage with and impact our communities with the gospel of Jesus Christ.

Now, on the other side of the conference, we give thanks to the Lord for answered prayer. As I ponder the week, I think of David’s words, “Behold, how good and pleasant it is when brothers dwell in unity!" (Ps 133:1). This is good not only for us as the body of Christ, but it is also good because it is a manifestation of the gospel of Jesus Christ, that which the gospel creates. It became a double witness to the Lord Jesus Christ—first of the gospel itself, which is of first importance (1 Cor 15:3), and second of the people created by that gospel.

Grounded in the gospel, focused on Jesus

As a brief summary, I will use the narrative of the early life of the believers as recounted by Luke in the book of Acts to highlight the conference. Luke writes, “they [the believers] devoted themselves to the apostles’ teaching and the fellowship, to the breaking of bread and the prayers” (Acts 2:42). Importantly, Luke speaks of the spirit with which they engaged in these ministries, that they did so “with glad and generous [humble, sincere] hearts” (2:46), with their ultimate goal being “praising God” (2:47a). Grounded in the gospel with a focus on Jesus Christ, this was the means and manner God used in which he “added to their number day by day those who were being saved” (2:47b). This was the heart of our theme for the conference. Worship service at EFCA One 2019. Photo by Tom deBruyn.

This is the beauty of the body of Christ lived out.
Tweet

Teaching occurred throughout the conference. The expository preaching in the plenary sessions was excellent. Each preacher was grounded in the text of Scripture and expounded and applied the truth in the lives of the hearers. Teaching occurred in the Deeper Learning Tracks, in which people were taught, trained, equipped, challenged and edified in various ways. Teaching also occurred in the Learning Labs, in which the focus was more on the practical implications and outworking of biblical truth in the various aspects of life and ministry. These were the formal times of teaching. Additionally, teaching occurred through our corporate singing, our fellowship and many other ways. Ed Stetzer leads a Learning Lab at EFCA One 2019. Photo by Tom deBruyn.

There are two important aspects to highlight about the teaching. Most importantly, it was all biblically grounded and theologically guided. God has the first word, the last word and all words in between. The second important aspect was that our learning was more than one-directional, from the instructor to the student. We also experienced the value of learning together.

To see the many conversations happening during the week, from beginning to end, was sweet. This is the beauty of the body of Christ lived out. It is the beauty of what David wrote about, that it is good and pleasant when brothers and sisters dwell together in unity. Paul writes, “There is one body and one Spirit...one Lord, one faith, one baptism, one God and Father of all, who is over all and through all and in all” (Eph 4:4-6). It was wonderful, and pleasing to the Lord, to see the deep conversations and the rich fellowship shared between brothers and sisters in Christ.

Apart from being dependent on God, apart from the work of God, there will be no spiritual fruit.
Tweet

The fellowship we shared was carried on to the friendships renewed and rekindled, along with new friends made, over a meal. This speaks of the oneness we share in Christ. There were also many meetings and times of fellowship scheduled around meals—for example: the Trinity International University/Trinity Evangelical Divinity School dinner, the chaplains’ dinner, the ReachGlobal breakfast, among many other spontaneous gatherings.

The whole gathering was bathed in prayer both prior to and during the conference. Many were prayed for during the conference, as we had those engaged to the ministry of prayer at the conference. I was one of those blessed recipients of prayer. This reminds us that apart from being dependent on God, apart from the work of God, there will be no spiritual fruit. We are mindful, both in belief and practice, “Unless the LORD builds the house, those who build it labor in vain” (Ps 127:1; 1 Cor 3:6-7). Prayer at the closing worship session of EFCA One 2010. Photo by Tom deBruyn.

With this as the context of our gathering, there were also important decisions made by the conference delegates. One of the more important decisions was the Motion to Amend Article 9 of the EFCA Statement of Faith, which passed with 79 percent of voting delegates affirming the Motion. This decision, made on June 19, made this an historic conference. After the delegates passed this motion, President Kevin Kompelien led attendees in prayer for unity in the EFCA and that the blessed hope of Jesus’ glorious return would motivate us to godly living, sacrificial service and energetic mission.

The conference delegates also made decisions about who will serve in leadership positions in the EFCA, consisting of the Board of Directors, the Board of Ministerial Standing and the Nominating Committee. The results can be read here. The delegates were also introduced to the 16th TIU president, Nicholas Perrin, who succeeds David Dockery, who now moves into the role of university chancellor.

The best days are ahead

Faithful gospel-centered ministry mandates and requires all to be engaged.
Tweet

As Laurie Seay, EFCA event director, pondered the conference, she noted the following: “We give thanks to God for the delegates, churches represented, times of corporate worship, fellowship and equipping that took place at EFCA One 2019. This would not have been possible without the efforts of the staff and volunteers from The Compass Church that hosted us so well. It is a joy and privilege to have planned this event, seeing God do a great work during the week.” All People Celebration at EFCA One 2019. Photo by Tom deBruyn.

Another encouraging indication at the conference was the excitement about the ministry and mission of the EFCA—grounded in biblical truth, the gospel of Jesus Christ, and carrying and sharing that to the ends of the world. Furthermore, the intergenerational spectrum of attendees was heartening and hopeful. Of the responses we have received from survey respondents, 35 percent were between 26-45 and 48 percent were between 46-64. Faithful gospel-centered ministry mandates and requires all to be engaged, and it is not a generational matter.

"The EFCA’s best days are ahead of us!"
Tweet

Here are the words of a younger attendee, sent via text-message: “Two thumbs up! I was struck by how much of a family the EFCA is. I’m grateful to be a part of this movement and excited for what God holds for the future!” Another younger attendee wrote, “My biggest takeaway from the week—we really are on mission together! Such a good week.” And here are the wise words of a ministry veteran, who had not attended for many years, as he writes, “this year we came home, and we are so glad we did. It was so good to see old friends (and I do mean old!), enjoy a wide variety of great seminars, hear some challenging preaching and observe our denominational leaders leading with integrity and compassion. There was controversy, but it was handled decently and in order. The EFCA’s best days are ahead of us!”

We give thanks to the Lord! We pray to the Lord for ongoing fruit from the conference. We recommit ourselves to biblical truth and faithful gospel ministry in and through the EFCA. And we remain prayerful for and anticipatory of what we will hear and learn of the fruit God produces in and through us between now and our next EFCA One gathering at EvFree Fullerton in Fullerton, California, on June 22-24, 2021.

EFCA One
disciplemaking
Statement of Faith