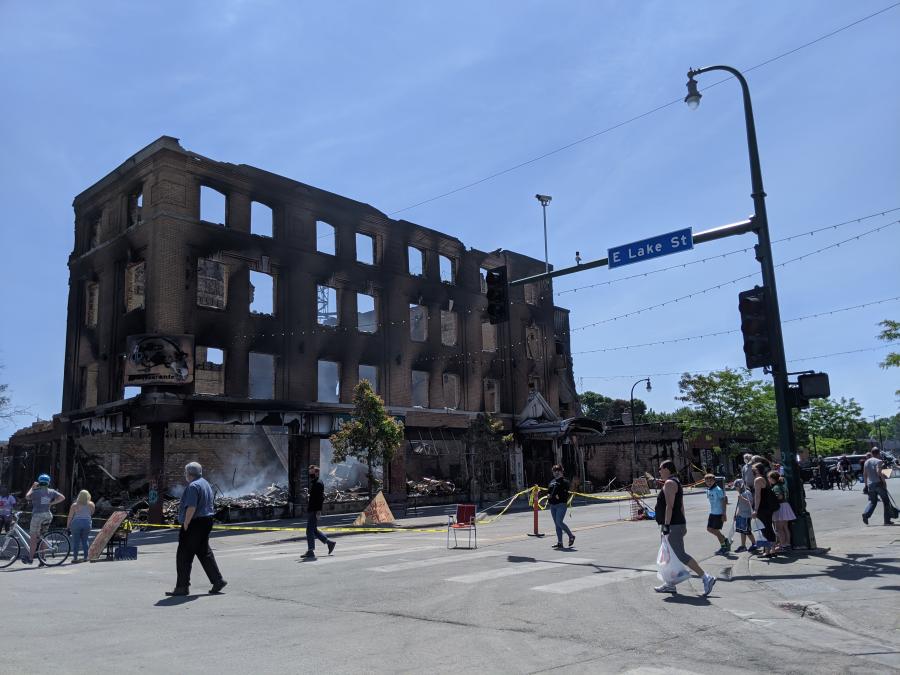 Three stories of EFCA churches serving their communities in Minneapolis

The senseless killing of George Floyd in Minneapolis on May 25, 2020, brought issues of racial inequality and injustice to the forefront of conversations, especially in the Twin Cities. The resulting protests reflected the deep pain and fear felt by many of our brothers and sisters of color.

In response to the injustice and destruction experienced by many of our communities in the past few weeks, several EFCA churches have responded. By praying, picking up garbage and providing free groceries, our congregations have made an intentional effort to show Christ's love and care for their local communities.

Minneapolis and Saint Paul are groaning from the pain of systemic racism.
Tweet

Here are three stories of gospel-fueled response from three EFCA leaders in the Twin Cities:

My church building and my home are right in the middle of all that's taken place. Stores burned within blocks, the 3rd Precinct is a couple miles away, and our church plant, Immanuel Fellowship, is located within blocks of where George Floyd was killed. Minneapolis and Saint Paul are groaning from the pain of systemic racism. A grocery store pop-up in the Twin Cities, following the death of George Floyd. Photo by Bryan Lair.

So the local church is grabbing a broom to clean up and a picket sign to protest. We're serving at grocery pop-ups and marching on our streets. We're preaching from our pulpits and praying on our front steps. African-American clergy organized a black-led clergy march. I participated in this march along with other church, religious and community leaders, including police officers. It's a picture of what needs to take place in the days, years and decades ahead.

We don't know with certainty what the next steps are, but we know we need to take some steps with the Lord as our guide.
Tweet

Let's join with one another and put one foot in front of the other for the rest of our days until lasting justice, restoration and peace come. Let's never forget the name of George Floyd, and let's call on the name of the Lord Jesus.

I live in north Minneapolis, and my mother-in-law lives in south Minneapolis. We smelled the smoke from the fires, heard the gunfire, and had yet another talk with our five children regarding injustice and racism and lost vital stores to our community. Now, we are living in a physically, mentally and emotionally destroyed community where there were already pre-existing inequalities of social and economic opportunities. As an elder team, we sent a message out to our members—mourning the death of George Floyd, urging members to stand in solidarity toward accountability and justice for George Floyd, and condemning the looting and destruction. As a church, we responded to the needs of those directly affected with an emergency grocery bag distribution that we are looking to continue weekly for a period of time.

How can we continue to champion justice and peace in our neighborhood and in our city?
Tweet

We don't know with certainty what the next steps are, but we know we need to take some steps with the Lord as our guide. The plan is to continue to help meet physical, mental and spiritual needs, and to join God in the opportunities He creates to do what seems impossible regarding racism and injustice.

Our church building is located 14 blocks from where George Floyd was killed, and many of our people live in south Minneapolis. Our city and our neighbors are angry and upset, and we're asking, "How can this type of thing continue to happen?"

A mural at the site of George Floyd's death in Minneapolis. Photo by Joel Sutton.

I drove down Lake Street (in Minneapolis) on Saturday morning (May 30), and it was packed with people cleaning up the streets and multiple food drives. We are joining with other like-minded churches and believers and starting to think long-term: How can we continue to champion justice and peace in our neighborhood and in our city?