Part 1 in a series on EFCA leaders’ recent visit to Montgomery, Alabama 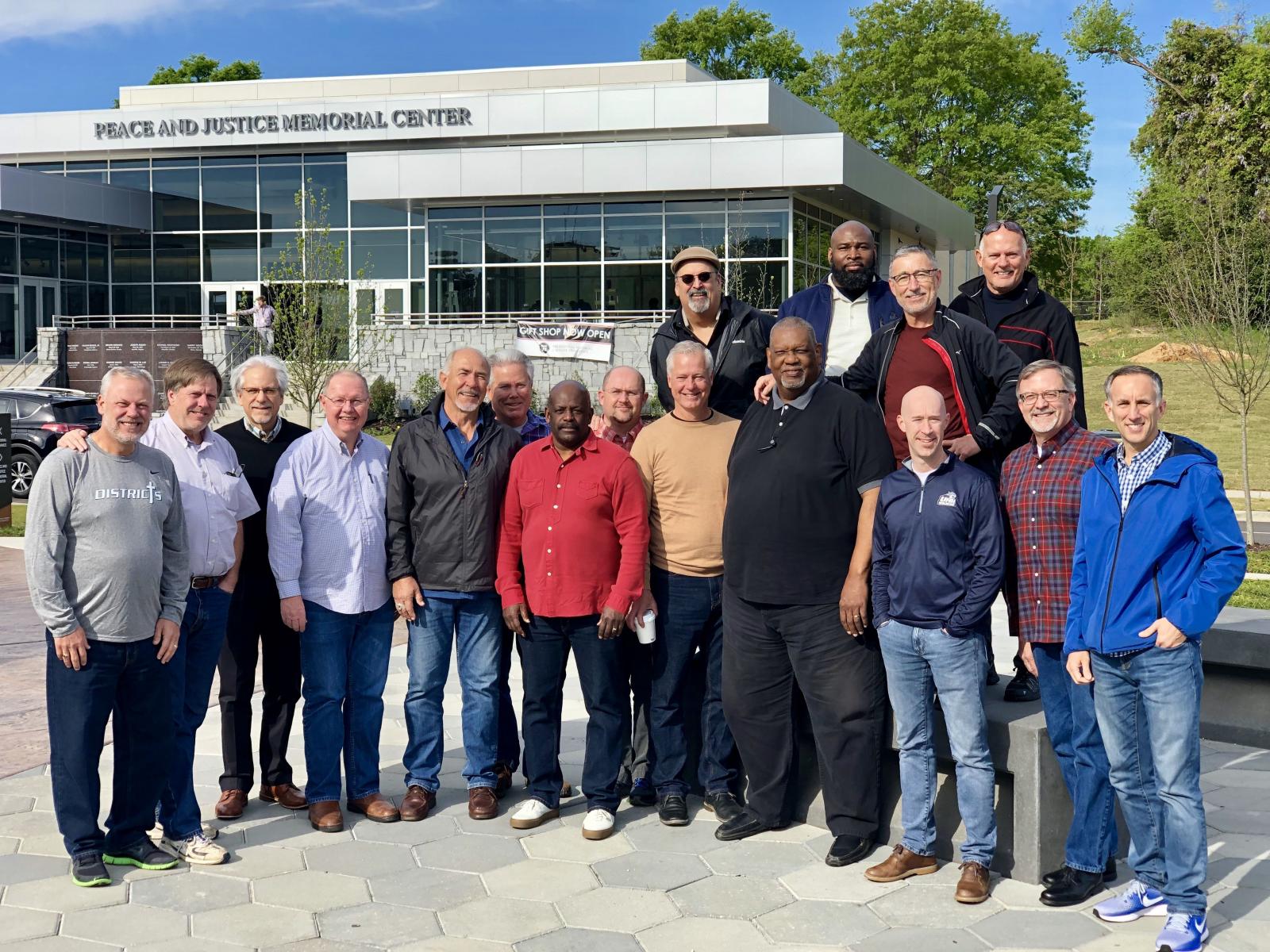 I stared at the photos in disbelief.

I’ve been to Auschwitz. I’ve visited Holocaust museums, both in Germany and the U.S., and have seen the Kigali Genocide Memorial in Rwanda. I thought I’d seen enough evidence of tragedy in my life for my visit to this museum not to shake me. However, standing there with three of my African American friends, looking at photos of thousands of people cheering and celebrating the lynching of African Americans absolutely shook me to my core. At the other memorials and places I visited, the injustice happened “over there.” What I was seeing now happened here, in my country! I stood there, brokenhearted.

Twice a year, district superintendents from across the EFCA gather for days of interaction, learning, encouragement, fellowship and prayer. Several months ago, Glen Schrieber, superintendent of EFCA Southeast, asked what I thought about the idea of having all the superintendents meet together in Montgomery, Alabama, to explore the deep issues of race, discrimination, mass incarceration and injustice that have marked both the history of our nation and our current reality.

These two spring days in Montgomery made a deep and lasting impact on my life. The opportunity to explore difficult things with friends and colleagues who share a strong commitment for the transforming work of the gospel among all people made these days ones that I will not soon forget. In fact, I know I will never be the same as a result.

A sermon and an illustration

Watching fathers try to explain all of this to their children is something I can’t get out of my mind.
Tweet

In late March, 13 district superintendents, Fritz Dale (EFCA director of leadership formation and prayer mobilization ) and I arrived in Montgomery to spend time together in dialogue, prayer and planning for the work of the EFCA across the country—as well as to visit the Legacy Museum and the National Memorial for Peace and Justice. After a day of discussing EFCA ministry and district issues, the group was joined by Alex Mandes (EFCA executive director of All People), Steven Weathers (EFCA director of multicultural ministry), Michael Martin (senior pastor, Stillmeadow Community Fellowship, EFCA), and Mark DeMire (senior pastor, The Community of Grace, EFCA). We invited these individuals to join us to give perspective on what we were going to experience.

As African American leaders in our movement, Mark, Michael and Steven shared from their own experiences and helped prepare us for what we were going to encounter at both the museum and the memorial. These men are my friends and have a deep love for the EFCA. It was clear by their kind yet direct conversation with us that we would face some very deep, heavy things over the next two days. I am deeply indebted to these brothers and to Alex Mandes for the investment they made in our lives. Without them shepherding us with grace and truth, our experience would have been much different.

The description on the Legacy Museum website says, “Located on the site of a former warehouse where black people were enslaved in Montgomery, Alabama, this narrative museum uses interactive media, sculpture, videography and exhibits to immerse visitors in the sights and sounds of the domestic slave trade, racial terrorism, the Jim Crow South, and the world’s largest prison system.” It is located just footsteps from one of the most active former slave auction sites in America.

The contrast between a beautiful sunny spring morning and the atrocities which these monuments represented was profound.
Tweet

Entering the museum, we saw a visual of the incredible growth of the domestic slave trade following the end of slaves being brought into the United States from Africa. My heart broke as I saw accounts of precious human beings traded like cattle to support the economy in southern states. Families were ripped apart, transported to other locations and sold. Hearing stories of horrific injustice and seeing photos alongside newspaper ads for the sale of slaves broke my heart.

The story of slavery didn’t end with the Emancipation Proclamation and the 13th Amendment. In many ways, slavery simply took on a different form as the “leasing” of prisoners remained legal in the U.S., resulting in the mass incarceration of African Americans. Lynching and racial terrorism, along with Jim Crow laws, continued to promulgate the lie of racial inferiority.

What most affected me was seeing African American children and their parents walking through the museum with us. Watching fathers try to explain all of this to their children is something I can’t get out of my mind. The next morning, we walked through the National Memorial for Peace and Justice—also known as the national lynching memorial. It’s the first memorial in America to honor the more than 4,400 African American men, women and children who were hanged, burned alive, shot, drowned and beaten to death by white mobs between 1877-1950.

My undergraduate studies were in American history, government and the social sciences. Why I wasn’t I told about these things?
Tweet

This outdoor memorial is a series of hundreds of steel monuments, about the size of a coffin, each representing a county with the names and dates of those who were lynched in states across America. As Mark DeMire said, this memorial was the illustration to the sermon that we heard on the first day at the Legacy Museum. The contrast between a beautiful sunny spring morning and the atrocities which these monuments represented was profound.

Leaving the museum and the memorial, my heart was filled with great sorrow and, honestly, feelings of anger toward both the wretched injustices and the fact that it took me until I was 61 years old to understand and experience these things. My undergraduate studies were in American history, government and the social sciences. Why I wasn’t I told about these things? In many ways, I simply wanted to sit down and cry.

I am so thankful to Steven, Michael, Mark and Alex who walked with us and for the district superintendents who were willing to face these heartbreaking issues together. The obvious struggle we each felt in confronting these things was written on our faces. Each day, we spent time debriefing and praying together—both for our hearts and for what the Lord would have us do as a result of our experience.

Since my time in Montgomery, I’ve been thinking and praying. I’ve waited several weeks to put my experience in writing as there have been so many words spoken and written on racial reconciliation with seemingly so little action taken. I didn’t want to add to it. The profound impact of the time was not simply the information, but rather the experience we had together as EFCA leaders accompanied by our African American brothers.

We cannot remain inactive and unaware while injustices still happen in our country every day.
Tweet

In the coming weeks, you’ll hear not only from me, but also from our district superintendents, Pastor Mark and Pastor Michael, and our All People leader, Alex Mandes, on their reactions and thoughts to what we saw in Montgomery, as well as our plan of action moving forward. We cannot remain inactive and unaware while injustices still happen in our country every day.

I walked away with questions ringing in my ears: “Who else needs to experience what we did in Montgomery? Who do I need to take with me to wrestle with these things? What must I do in response to what I learned and experienced?”

The wretched legacy of this stain on America still deeply touches the soul of our nation. I am committed to take others with me as I walk this journey to both understand the impact of these atrocities and proactively take steps to address the issues of injustice still plaguing our culture.

This is the first article in three-part series about Kevin, the All People leaders and the district superintendent’s time in Montgomery. Stay tuned for the next two articles, which will explore the experiences of others who were there with Kevin and wrestle with how God is calling them to respond.