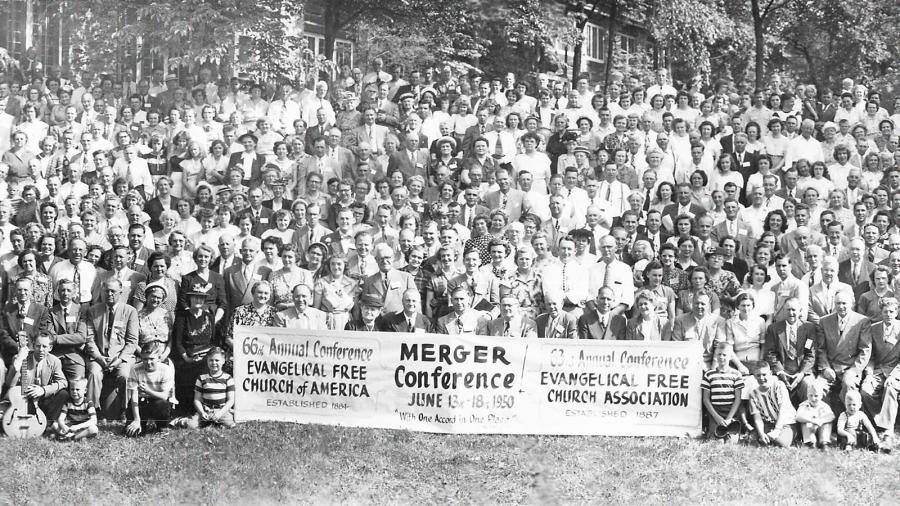 As he walked briskly across the lawn of the Medicine Lake Conference Grounds, just eight miles west of Minneapolis, the conference host greeted the early arrivals for the event. Rev. A.J. Thorwall was not just Director of Evangelism for the Evangelical Free Church of America, but also one of the hosts for the event. The day was already warming up to what would be a very humid 85 degrees that afternoon. Nonetheless, he was wearing his full suit, along with his trademark bow tie.

Serving as the host, he had countless details to arrange and people with whom to speak. But this was no ordinary conference. He was expecting a crowd of over 2000 people to attend the celebration service that evening. Many were staying in housing on the grounds, but many more would come in for the day. And for thousands more, it would be broadcast on KTIS, the Northwestern College (St. Paul, MN) radio station. The crowd at the Medicine Lake Conference Grounds

This was the day that two denominations of Scandinavian background would merge into one. The Evangelical Free Church Association was the body of Norwegian-Danish background, celebrating its 63rd year. The Evangelical Free Church of America was the body of Swedish background celebrating its 66th year. Both had been founded in the 1880’s of immigrants seeking a new life with freedom to worship outside the state church in their home countries, but also in a new country with better opportunities for jobs and farms.

As the European immigrants settled here, churches were started and began to work interdependently to send missionaries and train pastors, while maintaining their own congregationally-led local church polity. But the language of worship was still conducted in their mother tongues until the 1920’s when the second generation grew up, preferring English, which they had learned in their schools. By the 1930’s worship services began to use English, as did their respective publications. Some churches chose to have separate services for both English and the mother tongue worshippers.

As we look back, we can rejoice and celebrate with these leaders at how God brought these two associations together.
Tweet

Meanwhile, various leaders over the years like C.T. Dyrness and L.J. Pedersen made suggestions that the two groups should consider working together and merging. In 1934 the Norwegian pastor Arnold T. Olson drafted a greeting on behalf of their body to the Swedish group then enjoying its 50th anniversary jubilee, anticipating “a day of closer cooperation between the two Free Church associations.”

In 1939 the two groups considered more formal motions on cooperation, but they were voted down. Calvin Hanson notes in What it Means to be Free that there were four major roadblocks:

Nonetheless, God used Olson as the catalyst for the next steps. Though he was of Norwegian heritage, he was born and raised in America. After graduation from the Academy and Seminary of the Norwegians in Minneapolis, he pastored a rural church in Houston, Minnesota, then a city church in Staten Island, New York. He became President of the EFC Association, then served in World War II as a chaplain. In 1948 he became pastor of the (Swedish) First Free Church in Minneapolis. But that same year he was also made Chairman of the Committee of Unity (merger) and was able to influence both groups by speaking in their churches and writing in their publications.

Meanwhile the two bodies had already merged their respective pastoral training schools under the name of Trinity and by 1947 they were on one campus on Berteau Avenue in Chicago—and there was movement to merge their publications. At the time of the merger, each denomination was still publishing its own periodicals. The legacy Swedish EFCA had the Evangelical Beacon and the Chicago-Bladet. The legacy Danish-Norwegian EFCA published the Evangelist and the Evangelisten. But they were moving toward a joint English publication known as the Evangelical Beacon and Evangelist while the two Scandinavian language publications would continue for a time. All were being published by Free Church Press in the basement of the new combined offices on Nicollet Avenue in Minneapolis.

Most significant was the issue of the respective doctrinal statements. The Norwegian-Danish association had a 12-point statement which had been adopted at the merger of the Eastern and Western Danish-Norwegian Associations in 1912, while the Swedes had a nine-point statement adopted in 1947 in anticipation of the merger. They were remarkably similar because of Arnold T. Olson’s influence on the merger committee, but it took some careful discussion to combine them. The issue of water baptism had not been in the Swedish version but was added as Article 10 a few days before the Conference adopted the new EFCA Statement of Faith. The careful wording of the final statement reflected a truly united viewpoint with an overwhelming majority voting in favor.

The Swedish group had its own Board of Overseas Missions, today known as ReachGlobal. The decision was made to allow churches to send missionaries under either group as they felt led by the Lord.

On the 15th in the afternoon joint business session, the merger was formally ratified in a ceremony of great praise to God.
Tweet

So, in 1949 a formal Proposal for Merger was brought to the two bodies at their annual meetings. The Association delegates voted 73-5 in favor of moving forward and the EFCA cast 196 for and 13 against. In the months after the Conference, the local churches got to express their affirmation, and only two voted against the merger. By the 1950 Conference both of those churches had reconsidered and changed to affirmation.

The result was that as the delegates assembled on June 14, 1950, their respective business meetings were mostly about affirming the merger. Then on the 15th in the afternoon joint business session, the merger was formally ratified in a ceremony of great praise to God. Soon after, everyone assembled outside for the first joint photo—a scene of exuberant joy matched by the heat outdoors.

A few hours later, as over 2000 EFCA family members packed the huge wooden tabernacle on the Conference grounds at Medicine Lake, the culmination of the merger was celebrated. Speakers included Dr. E. A. Halleen, president of the Swedish body, Rev. Joseph Swan, president of the Norwegian association, and Rev. Arnold T. Olson. Halleen had been elected President of the merged EFCA for one year before retirement when it was determined that Olson would commence as President in 1951.

Little wonder that Thorwall, as well as so many others, came together that day with elation for the “marriage” of the two denominations. God has blessed the conjoined EFCA over these seventy years since 1950, far beyond the mere size of our denomination and truly evidence of God’s amazing grace. As we look back, we can rejoice and celebrate with these leaders at how God brought these two associations together into one, a small answer to Jesus’ high priestly prayer (Jn. 17). Grounded in the authority of God’s Word, committed to the gospel of Jesus Christ, and eagerly and expectantly looking to the future, the EFCA remains strong and vibrant, committed to “glorify God by multiplying transformation churches among all people.”