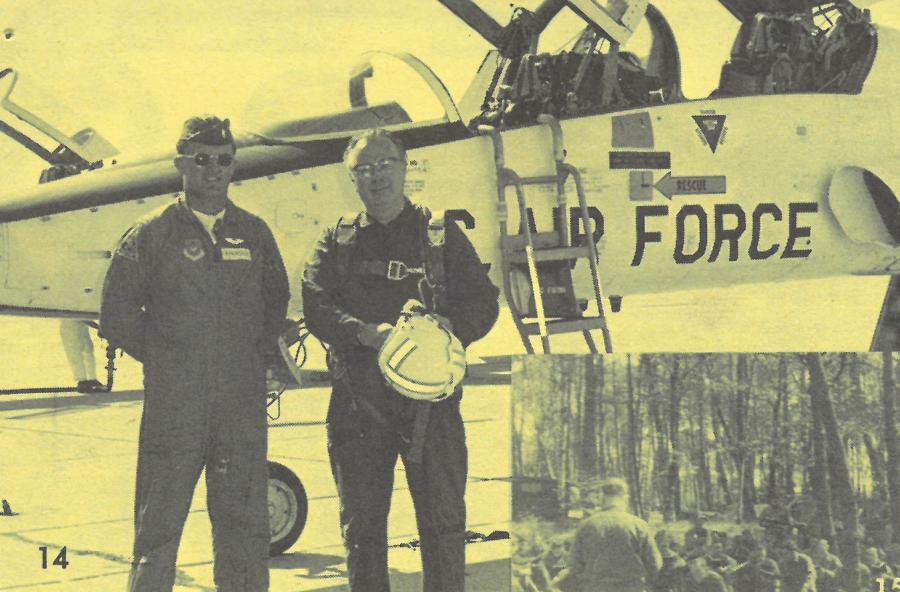 How prayer helped an EFCA president through a wartime tragedy

On Christmas Eve 75 years ago, an event of great significance occurred in both the history of our country and the EFCA. This is a story few have heard, partly due to military censorship during World War II, and partly because our former EFCA President, Doctor Arnold T. Olson, seldom spoke of it.

On a day that should have been full of holiday preparations, decorating and time with family, many American soldiers were thinking of their wives and children back in the States. Instead of celebrating the holiday at home, they made a very cold and rough crossing of the English Channel from Southampton, headed for Cherbourg on a Belgian passenger liner converted into a troop ship, the S.S. Leopoldville.

The wind whipped ferociously, and the temperature of the water matched the air—about 45 degrees on this midwinter day. Having left about 9 a.m., it was now almost 6 p.m., and they could see the lights of Cherbourg just a few miles ahead.

Some six months earlier, the Allies had crossed this same channel a few miles north. The D-Day invasion succeeded in starting the liberation of Europe, but at a cost of 4,000 Allied lives, half of whom were Americans. The troops on the Leopoldville assumed they were heading toward the Battle of the Bulge of which they had been hearing reports. Among the 2,200 soldiers on board that day were members of the Army 66th Infantry Division, known as the Black Panthers. Circulating among them was their 264th Regimental Chaplain, Doctor Arnold T. Olson, encouraging them, praying with some and doing what he could to help with their spiritual needs at this time of great anxiety.

Unknown to those around him, Olson carried his own burdens. He was greatly concerned for his wife, Della, and their three young children at home in New York.

Suddenly, a soldier on the deck saw “something heading right for the ship.” It was a torpedo speeding toward them.
Tweet

After graduating from the Free Church Academy and Seminary at the age of 20, he served his first church in Houston, Minnesota, for three years and then moved on to Salem Free Church in Staten Island, New York, in 1933. God blessed the work there, and he was viewed in the Norwegian Evangelical Free Church Association as an up-and-coming leader. Indeed, in 1942, he was elected as president of the group of some 50 churches scattered across the U.S. and Canada. This was the same year he earned his doctorate of theology.

However, the war had come to the U.S. after the bombing of the fleet in Pearl Harbor on December 7, 1941. The Armed Forces were already involved in the Pacific and now in Europe. At their church on Staten Island, the congregation said good-bye almost weekly to young men who were called into active duty. Della sewed a large service flag with a blue star on it for each of their men going to war.

During this time, Arnold dealt with an internal conviction. He writes in his autobiography, “Give Me This Mountain”:

“Added to all this was a personal struggle. After much discussion with my own spirit and prayer to the chief Shepherd, I finally made the first decision. I told Della of feeling called to volunteer for the chaplaincy but did not consider such a call validated unless God had also spoken to her. She answered promptly with twelve words; ‘I have been wondering when you were going to talk about it.’ She had been going through the same struggle and facing up to the matter of staying home alone carrying the anxiety for me and the burden of caring for three small children.”

Thus was made the decision in the spring of 1943, and Olson was soon on his way to training.

The first thing he remembers is walking into the survivors’ ward on Christmas Day and hearing someone joyfully shout: “Chaplain Ole’s not dead, he’s here.”
Tweet

Months after that decision, as the Leopoldville approached Cherbourg accompanied by an escort, the H.M.S. Brilliant, an undetected German submarine, U-486, pursued Chaplain Olson and his crew. Suddenly, a soldier on the deck saw “something heading right for the ship with a green wake behind it.” It was a torpedo speeding toward them. At 6:54 p.m., the torpedo crashed into the ship, exploded in the section near the rear of the troop carrier and tore a gaping hole in the hull.

Almost instantly, hundreds were killed, and hundreds more were thrown into the frigid water. In the dark, the H.M.S. Brilliant tried to save those in the water. Many more waited on the ship for orders to evacuate. At 8:30 p.m., the Leopoldville went down, taking many more to their graves. All told, some 800 lost their lives in this terrible naval disaster of the war.

Della writes about that night after the preparations for Christmas in their home:

“Soon I retired as well and fell sound asleep very quickly. However, it could not have been long afterward when I found myself sitting bolt upright in bed fully awake as if someone had called my name and said, ‘Arnold needs prayer right now!’ It was not until almost a year later when Arnold had returned home and we were discussing our respective experiences that I learned that at the time I was so suddenly awakened, he was in shock as the reality of the night’s terrible disaster hit him since mangled and dismembered bodies of his men were still being retrieved from the sea. For many years, he suffered compulsive shock on Christmas Eve after going to bed, as these memories haunted him.”

Raymond Roberts, writing a history of the disaster for his regiment, spoke with Olson years later:

“He does not remember the explosion, his rescue or anything about it until he arrived in the Army Hospital in Cherbourg. He was not visibly wounded, but several hours of his memory are blank!”

Olson later wrote that the first thing he remembers is walking into the survivors’ ward on Christmas Day and hearing someone joyfully shout: “Chaplain Ole’s not dead, he’s here.”

Christmas Day 1944 and beyond

All that Christmas Day, he ministered to his men in the hospital before rejoining his unit. Olson and his remaining Black Panthers served in several other parts of Europe before the war ended and they were discharged. He was given several awards and a Bronze Star. The citation stated:

“Serving as a regimental chaplain, Chaplain Olson through his unceasing efforts brought spiritual and moral guidance to his troops in such a manner that he is highly esteemed by all officers and enlisted men of his regiment. His pleasing personality, keen personal interest in the men of his unit and his untiring work to raise the morale of all by aiding those in difficulty reflects the highest credit upon himself and the military service.”

After discharge on December 15, 1945, nearly a year after the Leopoldville disaster, he returned to his church and to the presidency of the Norwegian EFC. In the years following, he was very involved in the process of the merger of the Swedish and Norwegian Free Church groups, which came to fruition in June 1950. A year later, he was elected as president of the combined EFCA and served as such until 1976. Interestingly, the S.S. Leopoldville had been the ship that had taken a number of our Free Church missionaries from Europe to Congo during the years prior to the war. Dr. Olson became one of the most significant leaders in our history, writing more than a dozen books on our history and theology, as well as his own autobiography, which you can read or download for free. His role as chaplain led him to develop a strong chaplaincy ministry in the EFCA, which is still thriving today.

Dr. Olson's experiences as chaplain greatly impacted him as he led the EFCA toward more effective church planting, evangelism and networking broadly with other evangelicals in this country, Europe and beyond.