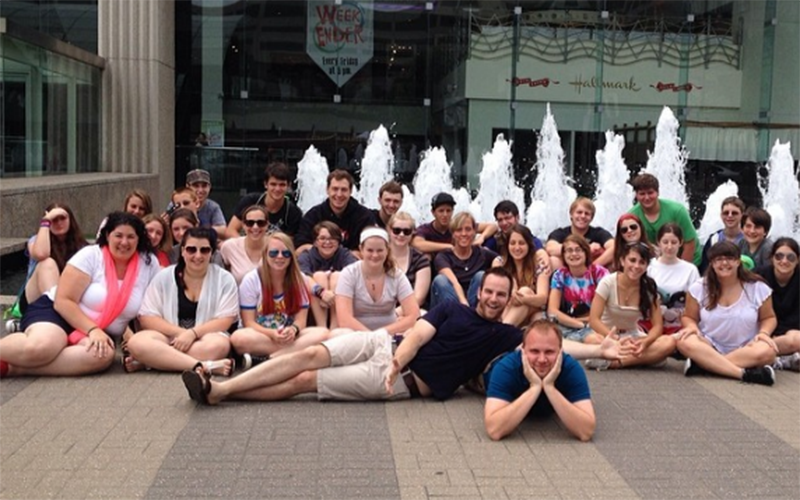 Making Space to Struggle and to Find Faith

The power of the EFCA Challenge Conference

“I’m a control freak, and I felt the need to understand everything about God and have Him in a box before I could trust Him.”

That’s how 17-year-old Marianna Cava used to explain her faith. But something powerful happened a few years ago when she journeyed from New York to Louisiana to attend the EFCA’s biennial youth conference: Challenge 2012. She made a connection with another student, who honestly shared his own faith challenges and allowed her space to struggle.

“What really hit me that night,” Marianna says about that conversation with then-17-year-old Luke Rise, “was that I didn’t have to be on top of everything to believe. I didn’t have to understand the infinity. If you can put God in a box, who would want a caged God? God used Luke’s words to give me some small assurance.

“Luke was able to talk to me about how he went through this and how much better it was once he surrendered.”

Marianna and Luke were in the same youth group at Dix Hills EFC, in Huntington Station, New York. Yet they’d rarely connected before. The Challenge Conference is like that—a bridge between students so they encourage each other to live on-mission.

Marianna’s time at the New Orleans conference that year motivated her to attend again two years later, in Kansas City. This time, it was Luke’s younger brother, Timothy, who was feeling a lack of confidence in his faith. After one session, when he stood up alongside a friend to request prayer, Marianna came to his side and prayed that both boys would submit their lives to Christ.

“God put that impulse in me,” Marianna says. “It was amazing to be part of big moments in their faith. I don’t think I’ll ever understand or fully appreciate what I was able to do there through God’s leading.”

“It means the world to me,” Timothy, now 14, adds. “I was really far away from God and didn’t know much about anything spiritual. Something brought me up on my feet. I can’t really describe it.”

Now, Timothy hopes to continue the multiplication. “It encouraged me to do it for other people I know who have younger brothers and who I know will pass it on,” he says.

But the stories of Dix Hills EFC and Challenge Conferences didn’t start in 2012.

Dix Hills’ then-youth pastor, Matt Cameron, had committed his life to Jesus in Salt Lake City at Challenge 2004. In turn, he had a hand in the faith of his then-volunteer youth staff, Jennie Bernstein, back when Jennie was a teenager. Later, at Challenge 2010, Matt and Jennie prayed together with Luke Rise for him to come to faith.

“There’s the cycle,” Jennie says. “When I saw Marianna and Tim praying, I thought, Of course it’s Marianna and Tim. I started laughing to myself and remembering that night with us praying for Luke in 2010, thinking that this night (with Tim) was what God had in mind back then.

“Discipleship is what it’s all about,” she continues. “God poured into us, we pour into others and they pour into others, and that’s how the world is changed. Each Christian isn’t supposed to go out and teach the entire world by themselves. We’re supposed to equip others to do the work.”

“It’s why I came back to Challenge every two years,” Cameron adds. “It’s a story of multiplication.”