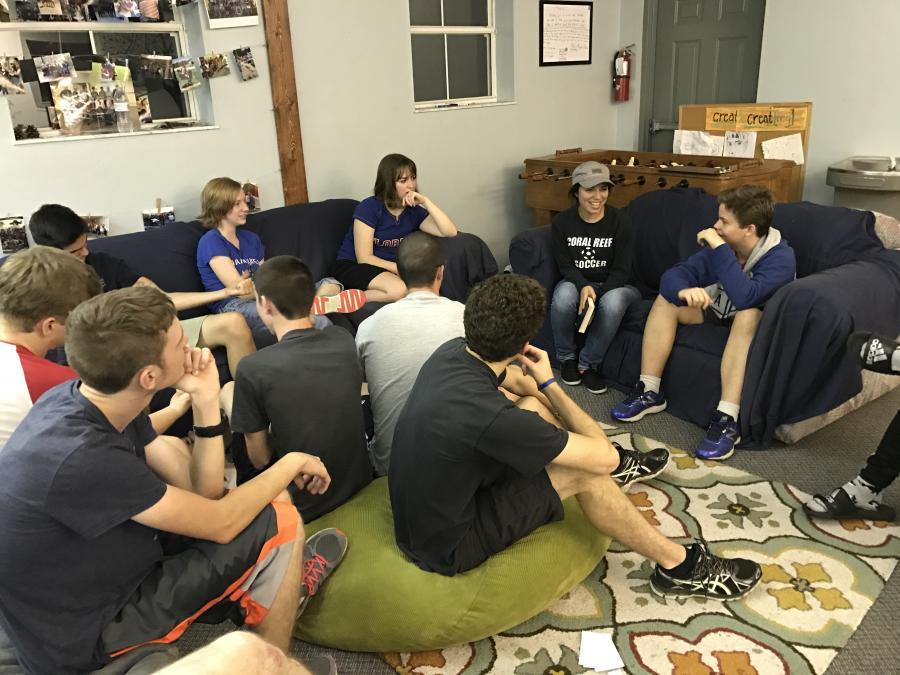 "We are looking specifically for a spiritually mature woman."

Traditionally, Creekside Community Church (Gainesville, Florida) has followed the path of its fellow EFCA congregations—looking for men to fill its lead position in student ministries. In fact, more than 90 percent of EFCA paid youth pastor/director roles are held by men.

But in youth ministry—with leadership often coming and going, in pursuit of advanced degrees and other opportunities—Pastor Steve Gregg and his fellow elders found themselves more and more open to women and men who were called and gifted to lead.

It happened gradually. Whenever the budget could accommodate more staffing in student ministries, the church would make sure that the second position was filled by a female. Which led to a greater, natural connection with teen girls and their parents—that’s because, Steve says, it was almost always a mom who held her finger on a family’s pulse. And that mother simply related better to another woman.

“The fruit we saw was phenomenal,” Steve says.

In 2011, Creekside took the next step and invested an even greater portion of its budget in a co-director position: a man and a woman, both full time, with neither as “the boss.” The duo was mentored by a couple in the church, B.J. and Shirley Fregly.

Taking the next step

Fast forward a few years, and Creekside’s youth leadership experienced more turnover. Whenever budget realities prevented the dual role, then the church hired a male as full-time director and a female in a part-time capacity. But it was obvious that effective ministry to the girls wasn’t possible in only 20 hours a week. They were routinely more eager to interact with a leader than were the boys, who already had multiple male role models in the church. So the female leader was stretched thin.

“It’s a richer, fuller complementarianism, and certainly it’s for us.”
Tweet

So in 2013, when positions were once again changing, Creekside unanimously chose to invest in a woman for a solo role. They promoted the woman who had been faithfully ministering part time, Michelle Atkinson. And a young man named Gianlucca served as her associate (while also serving as a part-time pastoral intern). The two would team-teach the youth on Sunday nights, while elders largely bore the responsibility for teaching during Sunday school.

For the two years she served as director of student ministry, Michelle joined the inner leadership circle, alongside other staff members who held discipling roles. With her strong connection to the students’ mothers, she was able to inform the team about how the families were doing.

As an example, Steve recalls how Michelle would ask him, “Have you checked in with so-and-so? I’m picking up some signs that maybe they need some encouragement.”

After the associate pastor affirmed, “I think you have teaching gifts and I want you to grow in them,” Michelle was also invited to join Gianlucca and the other pastoral intern in their study times with both pastors. That culminated in an opportunity for all three to speak before the church during “preaching night.”

Committing to a woman to lead the youth

In early 2015, when Michelle announced she would be leaving to get married, church leaders knew that they still couldn’t afford to fund their ideal partnership: male/female co-directors. So the Freglys, Michelle’s mentors, firmly told the pastors: You've got to get another woman in that role.

“We wanted someone able to teach,” Steve shares, “preferably with a seminary degree. But more than that, we wanted someone who could direct the program and who has the heart to love the kids and do life-on-life discipleship. That’s what we saw in Hannah.” Road trip! Creekside youth on their way to Miami, Florida, for a summer missions trip, with Hannah Casiple riding shotgun. (At top) Hannah, in ball cap, leads Creekside’s Tuesday evening gathering for high-school students with a discussion about how they engage in gospel conversations outside the church. Photos courtesy of Creekside Community Church.

Hannah Casiple* was finishing her degree in Christian ministry at Trinity International University when one of her professors saw the job posting. Hannah didn’t have a seminary degree, and she wasn’t yet experienced at teaching, due to her age: not quite 22. But with Creekside’s “deep bench” in teaching gifts, Steve was sure they could mentor Hannah in that area.

So Hannah was hired and started June 2015. Church leaders immediately began helping her build her “A team” of mentors and volunteers. But they also set the bar high for her in learning to lead. The assistant youth director, Gianlucca, saw it as his responsibility to get Hannah ready for the role before his own departure to seminary.

Gianlucca “championed” her in her new role, Hannah says—pushing her to make crucial decisions and take ownership.

Steve and his elders and staff team are convinced that co-leadership in youth ministry is ideal, if a church can afford two full-time positions. But if not, they determined that their greatest need was for a full-time female leader, with support from male volunteers. Shirley and B.J. Fregly couldn’t agree more. After their seven years of mentoring, they’ve seen how girls in middle and high school simply reach out more on an emotional level to their leaders, seeking connection.

“I’m called to love and shepherd my people as best as I can, male and female both,” Steve says. “But there are some conversations Hannah has with a 14-year-old girl that I’ll never talk about. There’s an intimacy she brings.

“As a complementarian church,” he continues, “we believe from 1 Timothy 3 that the roles of pastor and elder are reserved for men. Yet I have a church full of wonderful women whom I don’t want marginalized. We need both sides involved in ministry in a rich and fruitful way.

“At Creekside, we have women up front doing everything except the benediction and the sermon, because those are part of an authoritative position. But both men and women teach the youth.

“This might not be everybody’s solution, but we’ve found it to really work. It’s a richer, fuller complementarianism, and certainly it’s for us.”

Ultimately, Steve Gregg voices the hope that Creekside’s experience of learning and growing is a gracious story of what it means to give both men and women a place to flourish.

*Hannah Casiple grew up in the Evangelical Free Church of America, where her father pastors True Vine Christian Church in Miami, Florida. Read more of his story at the end of “Living Both/And” at efcatoday.org.

Episode 122: The Significance of Silence