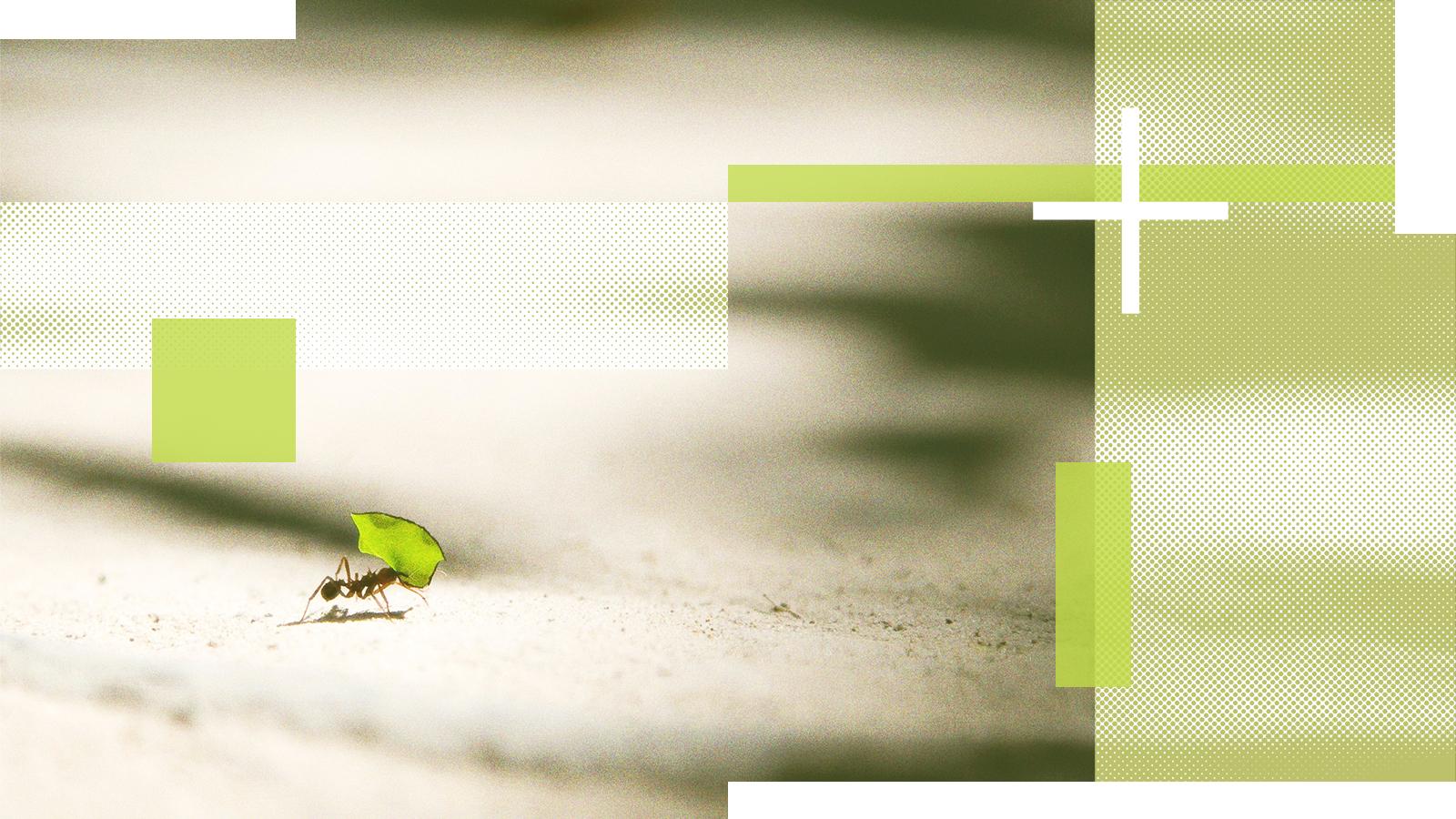 Have you experienced an ant infestation? Most of us have, but just in case you’re one of the few lucky ones to have escaped this experience, let me describe it to you.

Ants find something in your kitchen they like, they come in droves, and they spread everywhere. The first day you find ants, it’s not a huge problem. Just clean the counters, close any open containers with food and let it be. When they return though, that’s when you know the battle has begun. Recently, I found myself on day 27 of cleaning up ants multiple times a day.

Oftentimes, ministry involves us putting our hands to work without the promise of a payout.
Tweet

The actual physical act of cleaning them up isn’t even the worst of it. The worst part is that every time I clean them up, I think to myself, “I got them all. There is no way there is another ant living on this planet after how many I just killed!” It feels great. I’ve put my hand to the plow, and I’m seeing success. Sure enough, though, the ants return and I realize the fruitlessness of my efforts. Yet, for some strange reason, after countless fruitless attempts I continue to clean up ants multiple times a day.

This morning, as I was cleaning up ants, I realized something—cleaning up these annoying ants is kind of like ministry. Oftentimes, ministry involves us putting our hands to work without the promise of a payout. In the moment, the work may seem successful and even necessary, but often it ends without long-term, tangible fruit.

So what do we do when the work we’ve done seems to do nothing? What happens when we put our hands to the work in front of us and instead of getting a kitchen clear of ants, we find ourselves in a month-long crucible? What happens when our expectations crash and burn in the reality of the lives we live?

After a year of marriage in October 2017, my wife, Julie, and I moved from America to Southeast Asia and have served as missionaries with EFCA ReachGlobal for the past one-and-a-half years. Throughout my time in missions, I’ve spent several nights angry at God for a lack of “success” in ministry. Some of the more mature individuals reading this might think, “one-and-a-half years isn’t that long.” At this point in time, I’d agree with you, it isn’t, but my expectations of immediate impact had set me up to come to the field and fail.

Fulfillment found in what I do will never satisfy—only fulfillment in what Christ has done is enough to provide lasting value.
Tweet

I come from the church culture that always pushed “doing big things for God.” You know, the culture that’s constantly asking, “are you the next Billy Graham or Moses or King David?” and, as the pastor’s kid, I was always looked at as an example. Because of that, I learned how to perform for the approval of people at an early age. I knew how to make people think I was successful. I started leading worship at 15 and quickly found my identity in what I did. Look at how many ministries I’m involved in. Look at how much I’m doing. It’s no surprise this mentality followed me overseas. I expected to develop relationships overnight, to speak into lives right away, to be immediately accepted into community and to obtain a sense of “fulfillment” I’d never experienced before. Instead, what I experienced was, well, reality. Meaningful relationships take time—they don’t happen in an instant. It’s impossible to speak into lives when you don’t speak the language. Fulfillment found in what I do will never satisfy—only fulfillment in what Christ has done is enough to provide lasting value.

We put forth the perceived best, and it shifts the thinking of the church: If I just say yes to God, something like that will happen!
Tweet

I think there can be a sometimes-unspoken theology that exists throughout the Church—one that has been influenced both by a culture of pragmatism and the prosperity approach to life that thrives on social media. The theology is this: If I sacrifice for God, great things will happen, and I will be really successful in ministry.

Throughout my life, I’ve heard many positive missions updates, but I haven’t heard very many missions let-downs. We’ve created a culture that funds the tangibly successful ministries, and because of that, we usually only hear stories of success. Conference bills are filled with speakers who have thriving ministries, but rarely do you see the faithful laborer who has had a congregation of 50 people (on a good day) for the last 30 years speak about long-term obedience in fruitless seasons. We put forth the perceived best, and it shifts the thinking of the church: If I just say yes to God, something like that will happen!

Now, if you would have asked me about this before I went on the mission field, I would’ve called it straight-up heresy. What I didn’t realize, though, was even though my mind might identify this as a flawed view of what success is, my expectations felt otherwise.

One night specifically, I remember saying to God, “I sacrificed for you! I don’t understand why you aren’t just making this work! I left my life, my family, my church and it’s just not working! Why won’t you make this work?” I was feeling pressure to produce results from ministry and give updates to partners, and honestly, I just wanted to feel good about the work I was doing. I was tired of feeling like a lame duck who couldn’t speak the language without Google Translate.

The poor, the suffering and the powerless

Metrics of pragmatic success have set us up for failure. When pragmatism is our definition of success that translates into our churches where numbers matter most, empty seats shape the view of Sunday worship and the prosperity gospel runs rampant.

What would Jesus think of our definitions of success?
Tweet

When I was 20, I served as a youth pastor at a church where the lead pastor had served faithfully for 17 years. It wasn’t a large church, maybe 80 people, but the pastor had been faithful to shepherd and preach the Word. During my short time there, I saw the church—the same church who experienced his pastoral care—run him out of the building because the numbers of the church weren’t to their liking and the easiest thing to do was blame the pastor. We define our success by tallies in the win column. If we can win more than we’ve lost, we call it good. As I’ve been thinking about this, a question that comes to my mind is, what would Jesus think of our definitions of success? In Revelation 2-3, Jesus addresses the churches in Asia Minor:

“Write to the angel of the church in Sardis: Thus says the one who has the seven spirits of God and the seven stars: I know your works; you have a reputation for being alive, but you are dead. Be alert and strengthen what remains, which is about to die, for I have not found your works complete before my God. Remember, then, what you have received and heard; keep it, and repent. If you are not alert, I will come like a thief, and you have no idea at what hour I will come upon you.” (Rev 3:1-3)

Based on this passage, I have an observation that I think should shape the way we view success in the church and ministry: what it looks like isn’t always what it is. The problem with judging a church’s success based on pragmatics is that sometimes it looks alive, but it’s really dead. (Rev 3:1) When we define by the tangible success of numbers, we miss what we are really being called to do: point to Jesus, to hold on to what we first received and heard: the gospel.

The gospel calls us to be a people who focus more on what Christ has done for us than what we can do for Christ.
Tweet

Look at the two churches (of the seven) that are void of rebuke: one is Smyrna, the poor church about to experience suffering, and the other is Philadelphia, the church of little power:

“I know your affliction and poverty, but you are rich. I know the slander of those who say they are Jews and are not, but are a synagogue of Satan. Don’t be afraid of what you are about to suffer. Look, the devil is about to throw some of you into prison to test you, and you will experience affliction for ten days. Be faithful to the point of death, and I will give you the crown of life.” (Rev 2:9-10)

“I know your works. Look, I have placed before you an open door that no one can close because you have but little power; yet you have kept my word and have not denied my name.” (Rev 3:8)

Jesus doesn’t define success by the church that has the best reputation or does all the right things out of obligation. The two churches that he lifts up are poor, about to suffer and powerless. Shouldn’t this change the way we view success? Why are the poor, the suffering, the powerless lifted up? Because in those positions we have nothing but dependence upon Christ. Realizing Christ is much more concerned with our dependence upon him than with our grand successes for the kingdom has helped me to rightly orient myself to the work in front of me. He is doing the work, and I have the enormous pleasure of being part of it. If my work becomes more about what I do, than I’m missing the amazing opportunity I have to see Him at work and to live in His definition of success. The Lord has brought me into a place where I frequently remember His word to the prophet Isaiah:

It can be easy to think that if our life isn’t living up to our definition of success then we should pack it up and call it quits, but may I suggest a different option? In every season of life, we have an opportunity to point to Christ. When we feel as if we don’t measure up—in the spaces of being poor, powerless or in the midst of suffering—we have an opportunity to point to Christ. We can point to Jesus, who left the riches of heaven, didn’t count equality with God as something to be grasped, emptied himself and took on the form of a servant—a visibly powerless (by man’s definition) servant whose hands were nailed to the cross as he suffered and died for our sins.

Success in the Kingdom of God points not to the number of seats we fill, but to the King who daily bears us up.
Tweet

When we find ourselves in places that seem like we are just killing ants—never “succeeding” in anything—we have an opportunity to point to the One who has finished the work and who will bring our work to completion.

Success in the Kingdom of God points not to the number of seats we fill, churches we plant or lives we change, but to the King who daily bears us up.

Austin and his wife, Julie, currently serve as missionaries with EFCA ReachGlobal in Southeast Asia working with a team to multiply church plants. Austin is passionate about healthy missionaries, spiritual formation in the life of the believer, and good food. Julie is passionate about justice issues and is working to pioneer a project that partners discipleship with sustainable careers for women in Southeast Asia.